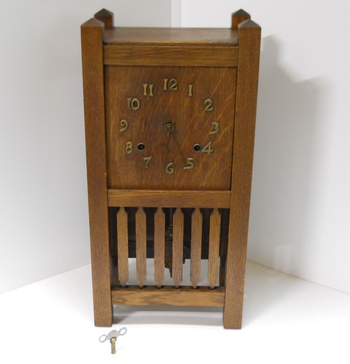 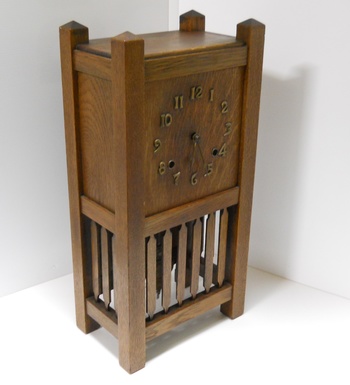 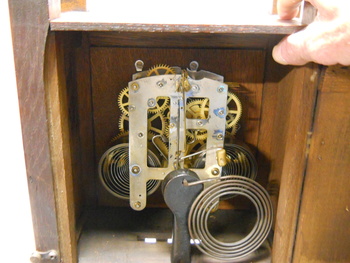 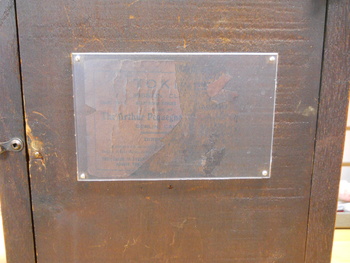 I found this Mantle Mission Style Clock at the donation store some time ago, in pristine Antique condition and working just fine, the condition of the case is just rare to be found like this, the wear and patina are beautiful, no repair or anybody touch the wood finish, that's a good thing.
This clock was assemble in Berlin, Ontario, Canada------The clock measures 19" inches high x 9 1/4" wide x 5.3/4" inches deep.

NOTE:
The city of Kitchener, Ontario voted in May 1916 to change the name of the city from its original name, Berlin, primarily because of some anti-German sentiment during the First World War. Through the latter half of the 19th century and into the first decade of the 20th, the city of Berlin, Ontario, Canada, was a bustling industrial center celebrating its German heritage. However, when World War I started, that heritage became the focus of considerable enmity from non-German residents within the city and throughout Waterloo County. The First World War created conflict among the citizens of Waterloo County. Not only were residents divided by ethnicity – German and British – but longstanding civic rivalries between Berlin (now Kitchener) and Galt (now Cambridge) increased the tension. The vote passed by only a slim margin.
Courtesy of ; https://en.wikipedia.org/wiki/Berlin_to_Kitchener_name_change

Arthur Pequegnat came from Switzerland to Berlin, Ontario around 1874 with his many brothers, sisters, and parents. In the 1880s he was importing watches for sale locally in western Ontario. Around 1897 Arthur built a factory in Berlin to manufacture ... bicycles! When that market started to decline, he began in 1904 to convert part of his factory over to making clock movements.

Initially the clock wood cases were produced in local furniture factories, typically with quarter-cut oak but occasionally with optional mahogany or walnut. In the 1920s he set up his own small factory for case production in nearby Breslau.

The name on most dials, on the labels (if still on the case), and on most movements is The Arthur Pequegnat Clock Company.

The town name was changed from Berlin to Kitchener in September 1916 because of World War I. Those date and city name changes make it possible to estimate the age of a Pequegnat clock. After Arthur died in 1927, relatives continued to operate the company until 1941. At that time the war-time shortage of brass, a key component in Pequegnat clock movements and other parts, forced the business to shut down. The factory never produced another clock, and was later demolished in 1964.

A whole book (now out of print) has been devoted to the history of this top-of-the-list, one-hundred-percent Canadian manufacturer of clocks. The authors were Jane and Costas Varkaris. Six original company catalogues were found during research for the book, but no company production records were ever discovered. Apparently the records went to the Kitchener garbage dump when the building was torn down in 1964.

Six company catalogues are known, dating from 1904 and ending with the number 6 in 1928.

Approximately sixty-five catalogued models of mantel clock are known, as well as sixteen models of wall clock (with variations) and seven models of grandfather (hall) clock. The Pequegnat company also sold "clock kits" for their various styles of clocks over the years - everything one needed except for the case.