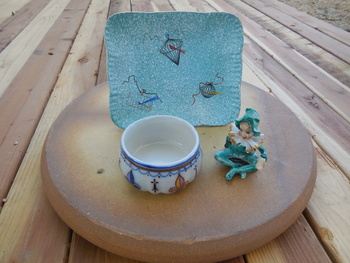 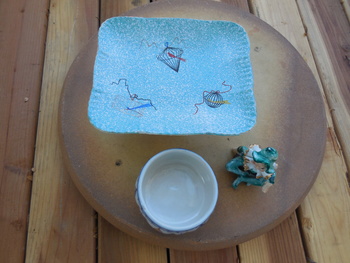 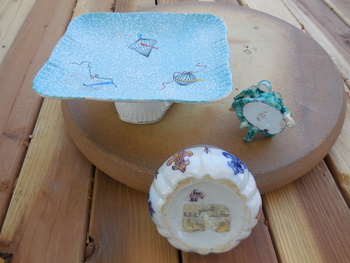 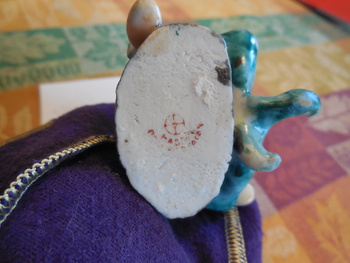 These were some of my Flea Market finds a Week ago on 11/16-17/2019.
First was this little Pixie Figurine. When I found it I thought that it might be from California, but I couldn't read the bottom mark. Turns out it's Made In Occupied Japan, but also is a design by Millicent Andrews, from Portland, Oregon for her Company Millesan Drews Pixies, called Pixie Potters c1950, in California, and given to Hagen-Renaker, for production, and finally to Cali-Crown Importers, where they were made in Japan, for a cheaper price. The bottom mark is a red stamped 'Shimazu' crest and "Made in Occupied Japan". So is easy to date the early 1950's The Pixie is 3 1/4"high x 2 1/2"wide x 2"deep.
Next is the 3 3/4"w antique Quimper Faience Pottery bowl with fleur-de-lis design on the exterior. This is what I think it is, but can't find information on the bottom mark, I found other pottery with a similar design, but not a match. The paper label was glued over the under glaze ink mark, and I removed and taped it under the mark on the bottom, it reads Shipped by E.D.E.T. Paris Made in France, but I don't know if the ink mark is a number or letters or both, and which way is up! Help! :^D
Last is the Rosenthal Continental China Pedestal Dish it's a mid century modern Raymond Loewy design c1960's "Bird Cage".
The Rosenthal Dish is Made in Germany, but unmarked, it's 7 1/8" x 6" x 2 5/8"h, and has a scallop with crimp edge Tray, and a Pebble textured glaze finish.

Thank you for looking all comments are welcome! :^)