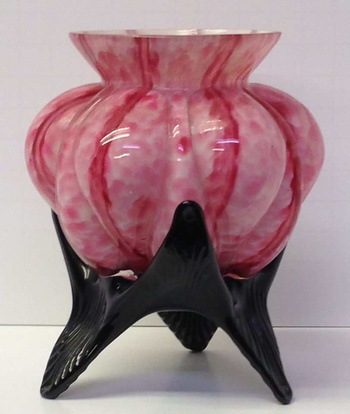 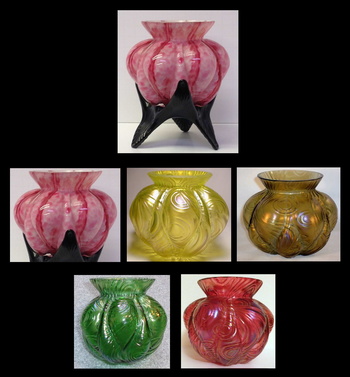 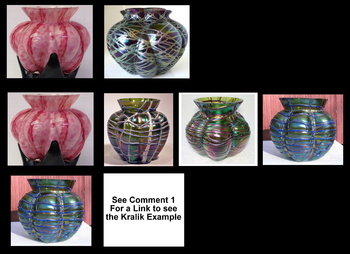 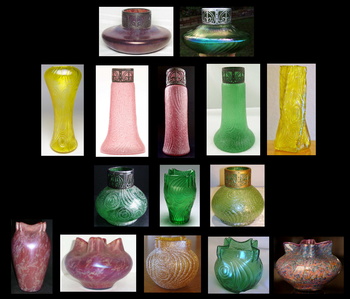 As many people know, I have believed for quite a few years now that Welz produced some pieces of glass in the Spiraloptisch décor, a design which originated with Loetz. There are notable differences between Loetz examples of the décor, and those produced by at least 1 or 2 other companies. Those other companies are Kralik and Welz.

I posted this information several years ago on my website, and the criticism leveled at the finding was intense, and not surprisingly, led by the gentleman who said the décor was Kralik. I would say it was a surprise, but that would be a lie.

Image 1 above shows a vase found recently by my friend Kelly, also known in this forum as Cornhusker. Kelly is an enthusiastic fan of Welz glass, and has accumulated quite a selection of their production. The vase in the first image is an example of what he found recently. The décor is unmistakably Welz, and in a form which is generally not seen in this production décor. The shape of this piece is quite unique, and up until now, has only been seen in a form without the applied feet. I was both shocked and thrilled to see this piece when he posted in in the Welz group in Facebook.

Image 2 above shows the form as seen in image 1, but now shown in comparison to several examples of Spiraloptisch in the same shape. This shape is one that is not seen frequently, and to date, has not been seen in a décor known to be by Kralik. I am of the belief that the shape is a Welz shape, and the examples of the Spiraloptisch décor in that same shape, are also Welz production.

Image 3 above shows us some shape comparisons. In the first row of the image we see the Welz shape, and next to it we see an example of prodeuciton which people attribute to Kralik. Although the shapes are quite similar, there are some notable differences. In the case of the Welz shape, the lines which determine the outline of the expanded form have curves. In the case of the example attributed to Kralik, the lines providing the outline for the expanded portion of the form are straight. In all of the Welz examples we see the curved lines. Also, an obvious difference is that the rim of the Welz form is circular in form, and the rim of the Kralik example is scalloped. In using shape comparisons for research, differences such as these may seem minor to some, but they are definitive differences which would prevent the two forms from being described as the “same”.

In the second row of image 3 we see some examples of veined production. In this case the formed “bulges” are a different shape, but the rim is circular in form. The importance of this shape is shown in image 3 row 3. In the case of this example comparison, you will have to click on a link I will put in comment 1, as the individual(s) that sold this piece on ebay years ago, insists that CW prevent me from posting their images here….. I guess supportable research is not their “cup of tea”, unless it agrees with their “agenda”…. Which I very rarely do……. :-) In the linked image in comment 1, you will be able to view the same image, but with the absent image included. In this case, the included image shows the same shape as the Kralik Veined examples, but in a Spiraloptisch décor. In this case, the definition of the décor on the glass surface is no as clearly defined as the Welz examples. I believe that this example is by Kralik. This is actually the only example of this shape in this decor I have ever seen, otherwise I would use a different image to support my research conclusions.

Image 4 shows some production which I believe to be Welz. The top row of the image shows a vase by Welz, in a glass they held a patent for, next to the same unusual shape in a green Spiraloptisch. This unique form also links Spiraloptisch production to Welz. These are the only decors I have ever seen on this particular shape. Knowing that the form is very uncommonly seen, I would dare to say that the old line of defense that “everyone made everything”, a narrative used in this forum tirelessly over the last six or seven years, would not really be applicable for a shape seen less than 5 times in the 10+ years I have researched Welz. Row 2 of this image shows a few different forms I believe are Welz, and in both a smooth finish and an overshot finish glass with the Spiraloptisch surface décor. Line 3 shows a couple of additional overshot examples, and also a green example with a very distinctive rim crimp. The discovery of this example was the single piece which caused me to suspect the décor to be by Welz. The bottom row in this image shows a number of pieces of production, both in the Spiraloptisch décor and also in a glass made using a Welz patented formula. It is also noteworthy, that this style of glass made using their patent, does not seem to be a formula that Welz allowed others to use. All of these examples share a distinctive rim crimp. Similar crimps were used by others, but close examination of different examples shows us the differences.

Although I have been of the belief that Welz produced Spiraloptisch production for many years now, this most recent shape discovery helps to add more supporting evidence that my belief is accurate.

Thanks to Kelly for the use of his images of the pink footed piece.