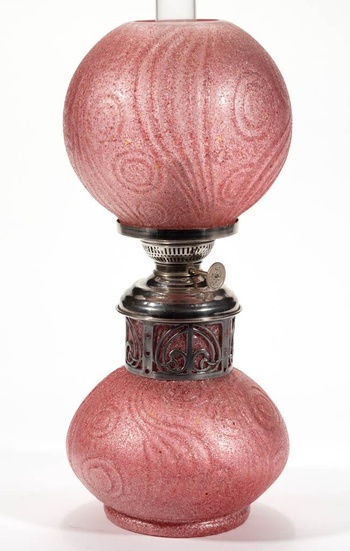 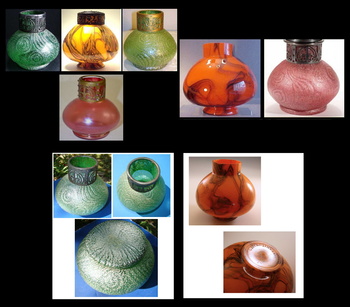 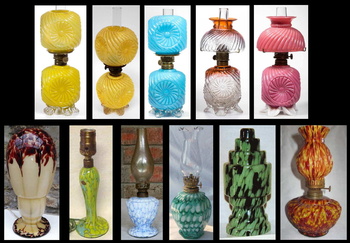 Through the years I have found a handful of Welz lamps. Generally these lamps have been found in known decors that are from the 1920’s and 30's. Recently I was provided a link to a lamp in a cranberry overshot Spiraloptisch décor…. A décor that Welz produced. In ensuing discussions with a few collectors, I was graciously provided a set of image of lamps believed to have been produced by Welz.

First let me state that I have full permission by the auction house that sold the lamp in image 1, to use images of their sales items for the purpose of educational posts, and for use on my website. For that I am always grateful when companies grant me permission to do so.

The first image above is the one that inspired this post several weeks ago. One thing I had to wait for was the auction to complete, as we can not use images of items that are actively for sale in this forum. This lamp, shown in the Spiraloptisch overshot décor stands at approx. 12 inches tall. The base of this lamp is one I found to be extremely interesting. Although I have not seen the pink Spiraloptisch décor on the form before, I immediately recognized the décor, the shape, and the collar on the base of the lamp.

Image 2 above shows two examples of the Spiraloptisch Overshot décor, and in the middle a similar but different shape. This middle example is shown on a Ruckl website as Kralik, which I agree with. The Spiraloptisch examples to the left and right of this piece have also been declared to be the same shape as the Kralik example. This is a claim I completely disagree with and have been vocal about that disagreement. Under the middle example is a pink example in what I would call a Glatt décor. These examples with the collar and long neck in the Spiraloptisch, and a couple of other décors, are not seen very often, and the fact that they appear to be the remnants of lamps which have likely been damaged, would be a good reason for that. Not actually a vase…. A base for a small oil lamp.

Image 3 above shows 6 examples of lamps which I was provided with, and below each of them I have placed an example of Welz production in the same décor.

Image 4 above shows 11 lamps, consisting of 11 examples of 9 different shapes. I am of the opinion that these are all Welz production. The sizes of these lamps vary.

I have changed out the second image in this post for one that shows more views and angles of the Kralik and Welz shapes. My most vocal critic is adamant about the fact that the shape in question is simply a variation of the Kralik form found in several decors, and also found with an arched mark commonly accepted to be Kralik's. The claim being made in another post put up by my critic after this lamp post, is that the two shapes are the same, but there is a slight difference in the feet which can be overlooked because it is a product of camera angles, different molds et al.

As someone who has used the study of shapes for a long time in an effort to identify Welz production, I maintain the position that these shapes are similar, but absolutely not the same.

The study of shapes results in information that can be used in several manners. One of those is to study the shapes, and if there are noticeable differences in similar shapes, to accept that as an indication that they are by different houses, and continue the search for additional information.

The other method, is to make the claim that they are close enough, therefore they are variations of the same form by the same house. This line of thought allows one to support previously made attributions, while "excusing" obvious differences in the shapes. I see these 2 shapes as distinctly different, yet very similar. I quote from a different post in this forum: " I see it as another form of claiming many Kralik glass pieces as being produced by someone else." So in this case, claiming that these are different shapes (they actually are) is a method by which the claim can be made that they were made by Welz.

If on one hand, the glaring differences are simply accepted as being a similar shape, the path is cleared to continue to attribute all Spiraloptisch not made by Loetz, as made by Kralik. This claim was made many years ago by a different researcher. I believe it to be incorrect.

Research is not, and should never be, about finding evidence to support a previously determined result. Actual research is about finding information and facts, following those facts and observations, and arriving at a result that the facts support.

In the case of the new image 2 above we can see what the actual differences between these 2 shapes are. The upper left portion is the original image I posted. The claim made in this forum is that the comparison is false because the camera angles were different. Having studied shapes for years, I would agree that the camera angles are slightly different. I would also note that the differences seen with the base of the 2 shapes, is not a difference magnified or distorted by camera angle differences. I think that the upper right pair of images shows this reasonably clearly. But let's not stop there. Let's examine an image of the underside of both of these shapes. The bottom grouping in the image shows a comparison of the shapes, but most importantly, it shows a base shot of both forms. No real camera angle issues here......

In doing some calculations using several different images of both of these forms (both the Kralik and Welz) I studied the relationship of the foot diameter to the diameter of the vase at it's waist.

In the case of the Kralik form, the diameter of the base or foot, is 45 to 50% of the waist. In other words, if the waist is 7 inches in diameter, the foot has a diameter of approx 3.5 inches. This is consistent with all of the Kralik shape examples I examined.

In the case of the Welz shape, if the diameter of the piece is also 7 inches, the diameter of the base or foot is consistently in the 70% range, or 5 inches in diameter. The foot on the Kralik form also elevates the base of the form off of the sitting surface by about an inch. In the case of the Welz form, the foot or base is a flat pad, and elevates the form very little (the thickness of the foot itself).

As stated in a comment below, I leave forum members to make a determination for themselves if these are variations of the same shape by the same company, or if they actually represent as I have found, two different but similar shapes by 2 different companies.