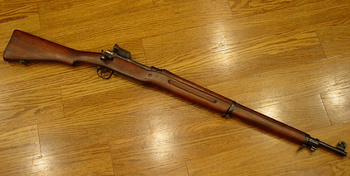 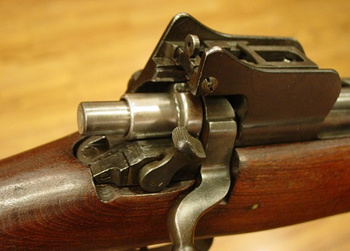 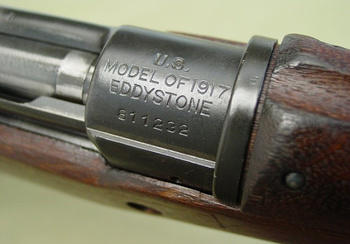 The Model of 1917 is a bolt action military rifle with an integral 5-round magazine. A version of this rifle, and a new and more powerful cartridge, were designed and produced by the British as a replacement for the SMLE (Short Magazine Lee Enfield) service rifle in .303 British. It was called the Pattern 14 rifle. When WWI began, the British were unable to begin production of the rifle in the new caliber, which had issues, and they also lacked sufficient manufacturing capabilities to produce the quantities needed. The British had already contracted with three American companies to produce the new rifle in the new caliber, but instead modified the design to use the old .303 cartridge.

When the Americans entered the war, they also found themselves unable to produce their then current service rifle, the Model 1903 Springfield, in sufficient quantities. The 1903 used the .30-06 cartridge. Since the U.S. was already producing Pattern 14 rifles in large quantities, it was decided to redesign the rifle to use the .30-06 cartridge, a fairly minor change, and use the "new" Model of 1917 (M1917) to make up for the shortfall. In the end more M1917 service rifles were issued to American troops during the war than M1903 rifles.

This is a robust and well made rifle. The sighting system was a significant improvement over previous service rifles, in general. After more than 100 years, this rifle is still in use today by the Danish military due to its ability to function well in extremely cold conditions. A rifle of this type was used by Corporal Alvin York in the storied series of events which resulted in him being awarded the Congressional Medal of Honor.

The rifle pictured was arsenal refurbished by the U. S. and then never re-issued. It remains in like new condition. Based on the serial number, it was made over 101 years ago in June 1918, just in time for the Battle of Argonne Forest .