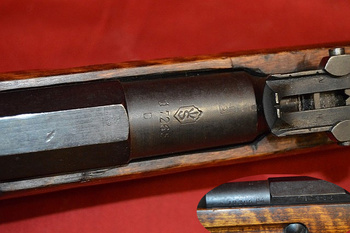 The Finnish Model M91-24, or M24, is a bolt action military rifle based on the Russian M1891 receiver. The M24 was produced in very small numbers for the Suojeluskuntain Yliesikunta (Civil Guard) using imported barrels from Switzerland and Germany and captured or purchased M1891 receivers. A total of 26-27,000 rifles were produced between 1924 and 1926. The funding for the M24 rifles was raised by the Civil Guard Auxiliary known as the Lotta Svard and, as a result, they were known as “Lotta Rifles”. The Finns had captured and purchased a large number of M1891 standard Russian military rifles, but were not satisfied with the condition, accuracy or usability of the rifles in their possession but still decided to use the M1891 as their standard military rifle. To remedy the shortcomings of these rifles, the barrels were replaced with a heavier barrel, the trigger and sights were improved and the stock was modified or replaced. One feature of most M24s that makes them easily recognizable is a stepped barrel. Bohler-Stahl is stamped on the barrel under the stock. The first three thousand M24s made had a heavy barrel in the style of the Russian M91 Mosins.

The M24 was among the first, of several, improvements made to the Russian rifle by the Finns. The Finns were involved in two protracted wars with the Russians, a brief war with the Germans and many of these rifles were lost to attrition and others were reworked into later revisions of the Russian rifle, the M27, M28, M28-30 and M39. As a result very few of these rifles have survived and are now quite uncommon.

This rifle remains in good condition and all serial numbers match. It is the only one I have come across for several years. The meaning of some of the stamps: