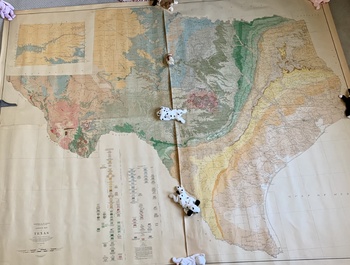 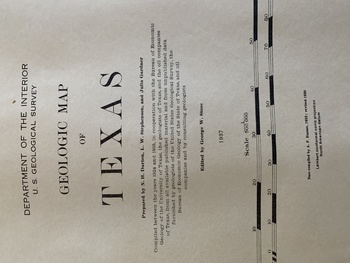 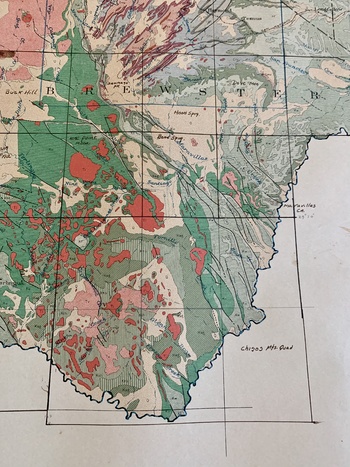 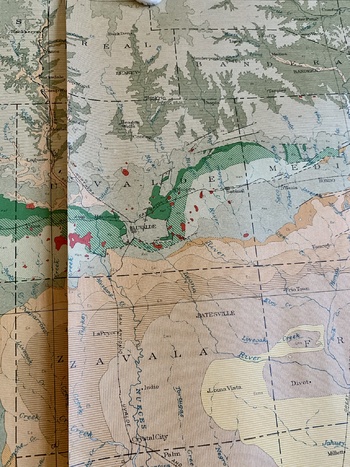 Pick up this Oversized 4 Piece Texas Geo Map, dated 1937. Each piece measures approximately 62 inches x 41 inches
Well I ended up selling this one to a Map Dealer and this was his professional Write Up.......
Mammoth 1937 geologic map of Texas
Prepared by N H. Darton, L. W. Stephenson, and Julia Gardner… Edited by George W. Stone… Base compiled by A. F. Hassan, 1922; revised 1930, GEOLOGIC MAP OF TEXAS. Washington, D.C.: U.S. Geological Survey, 1937.
Printed in colors on four unjoined sheets, each ca. 41 ½”h x 54”w at sheet edge, if joined ca. 80”h x 100”w at neat line plus margins. Somewhat unevenly toned, traces of liquid stains still evident after cleaning, some mended tears and wear to margins. Some notations in ink and pencil to lower-left sheet. Lined on verso.
The map uses more than 100 combinations of color and shading to differentiate the state’s geologic strata. These are described by an explanatory table on the lower-left sheet, where the symbols are organized chronologically by geological epoch, from the Pleistocene (variations on brown) all the way back to the Pre-Cambrian (grey and red). The overall effect is visually striking and highly decorative, particularly on a map of this size, as well as highly informative: The pattern of coloration makes instantly clear that generally speaking the strata age as one moves inland north and west from the Gulf of Mexico.

The map was compiled at a time when, as now, Texas led the United States in oil production; it extracted some 5,127,000,000 barrels in 1937, more than one quarter of the country’s production. Not surprisingly, given the many stakeholders in the staggering wealth being produced, the map’s compilation involved a complex public-private consortium. As explained by the long note below the title: