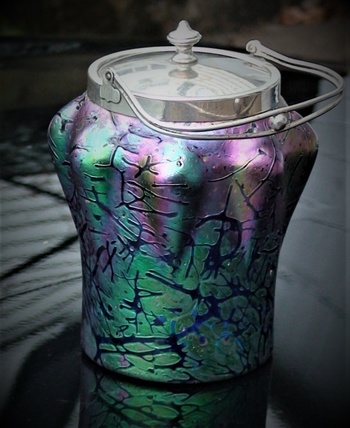 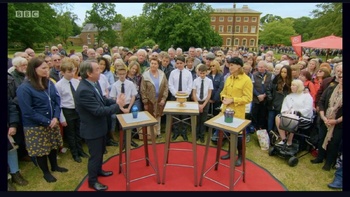 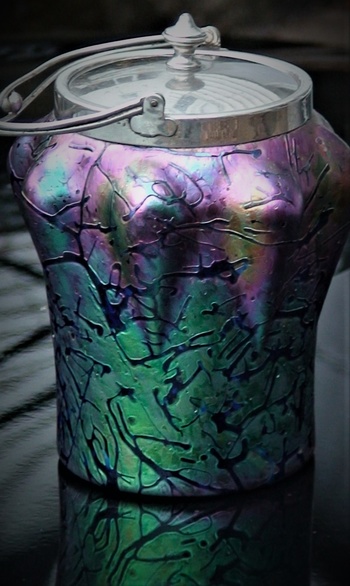 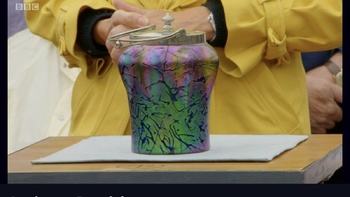 KRALIK BACILLUS Iridescent Glass Biscuit Barrel Featured On Antiques Roadshow September 29, 2019. Series 42, Lytham Hall
Purchased from Scottish Antiques who state that this is the exact biscuit barrel featured on the Antiques Roadshow.
Kralik Bacillus biscuit barrel - experts believe the bacillus line was a collaboration with Loetz and Tiffany in the late 19th, early 20th century. Sumptuous color and striking iridescence. It is just a beautiful piece of art.
This beautiful biscuit barrel was featured on the BBC Antiques Roadshow on September 29, 2019. Series 42, Lytham Hall 1. It was part of the shows “Basic, Better, Best” feature. The BBC antiques expert said it was a beautiful example of Kralik glass.
Colors: Iridescent green, blue, and purple glass.
Conical with eight shoulders.
There is a visible inclusion in the glass and one burst bubble. The silvered metal has some tarnishing.
Weight : 823 grams
DIMENSIONS
Height: 19.0 cm
Date of Manufacture: circa 1900
Material: Glass
Period: Late 19th Century - Early 20th Century

From sklo42: A very special biscuit barrel and a story to go with it too!

The BBC expert in the image above is Eric Knowles. He is the proprietor of Scottish Antiques which curiously is based in the south of England. He also sells on ebay uk as Scottish Antiques if that's of any interest to anyone.