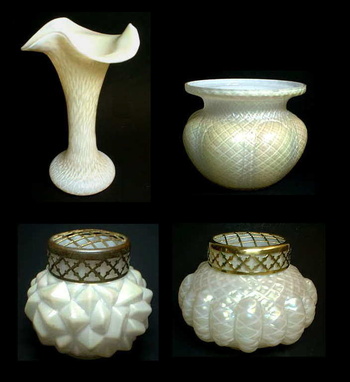 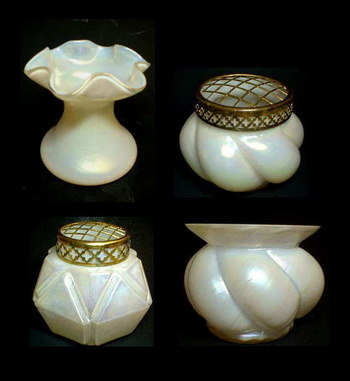 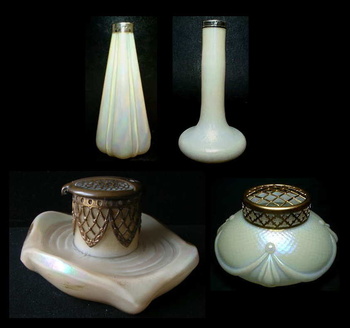 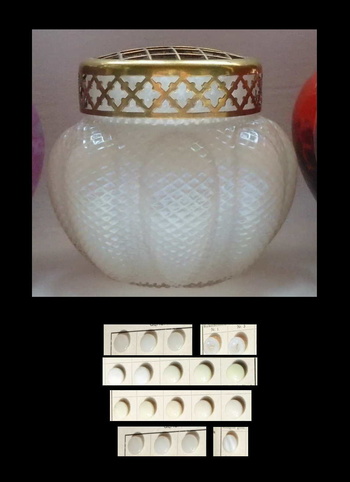 When my website was first being worked on around 10+ years ago, I was provided images of a group of production and was told it was all Kralik Mother of Pearl glass. At the time I really had no basis with which to doubt the claim. I also had, at that point in time, a belief that the gentleman who informed me of that knew what he was talking about….. I later came to doubt some of his attributions. Those doubts have been reflected in some of the pages and changes in some attributions on my website.

After about 1.5 to 2 years of the website being online, I came to seriously doubt the claims about the production, and who made it. Based on that doubt, I removed the page from my website. Of the pieces which were removed, as shown in the three group images above, I would be comfortable calling 2, maybe 3 of them Kralik at this point.

At the point in time that my site went up and the page was included, almost every piece of this type of glass was being classified as Kralik production by one individual doing Bohemian glass research. In hindsight I find that to be a mistake.

I do not believe in many cases, that the attributions of MOP glass to Kralik were correct, and now find many of them to be both unsupported, and at least for now, unsupportable. I do find the example as shown in the last image to most likely be Kralik, based on the shape and it’s link to other Kralik decors.

I also find that based on this, contrary to my earlier post, it is obvious that Welz was not the only company to use the Diamond Quilt surface texture……. But I do believe all of the examples in my post in this forum on that subject are all Welz, and none are Kralik. There are other aspects of the production also pointing that direction.