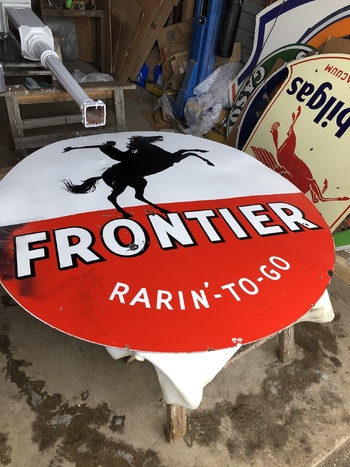 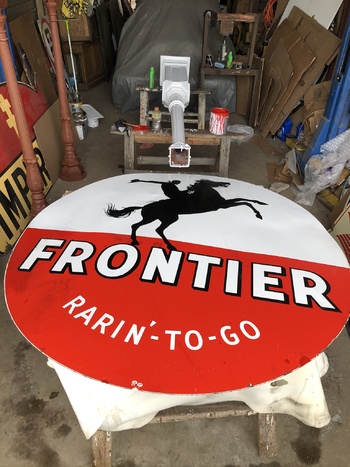 We found this Frontier in the Wild last week and I went to nowhere Nebraska and picked it up with my truck as fast as I could get there. We were already picking up a load in El Paso so it was only 12 hrs out of our way. It took some serious cleaning as well as a little touch up but it has vivid colors and is awesome considering it’s age etc. 2400 mi in three days is a long trip for oldies like us.
I found this and another Frontier sign while my son was stopped for the night in a tiny town in Nebraska while on his way to hunt deer in Kansas. Since he was there and I was in Hawaii, I called every place around to see if anyone had any big Porcelain signs they might sell us while he was in town or even on his way back from hunting. My son whined and complained that I’d never find anything but he might haul it home IF IT WAS A FRONTIER. Surprise! That was exactly what I found! Of course they weren’t for sale, but we buy things that aren’t for sale all the time so no big surprise to get these.
Unfortunately none of the 4 signs I bought would fit in the vehicle my son had so I had to go pick them up in my truck. Isn’t life exciting?
Merry Christmas.