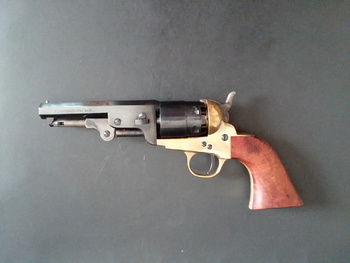 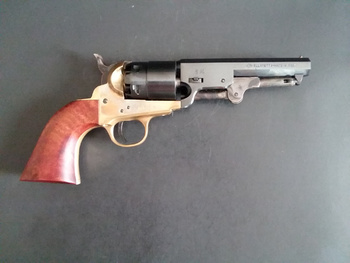 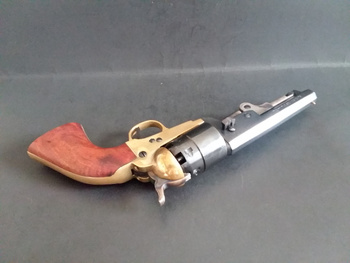 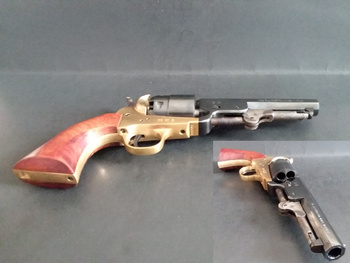 This is modern Italian "reproduction" of a Colt firearm which never actually existed. It is based on the Colt Model 1851 Navy revolver, a six shot single action percussion black powder revolver. The Navy model was a very popular revolver in its time and was adopted by both the U.S. and British military. It received its name from examples which had engraving on the cylinder depicting the Texas Navy's victory over the Mexican fleet in 1843. Colt produced it for customers with a steel frame in either .34 or .36 caliber with a 7.5" barrel and weighing in at 2.6 lbs. The Colt Navy was never actually produced by Colt in the .44 caliber with a 5.5" barrel or with a brass frame. There were some contemporary copies made by other manufacturers with a shorter barrel and brass frame, though. These shorter barrelled revolvers are called "Sheriff Models" because the shorter barrels make them less bulky and easier to carry and to draw, like something a sheriff might carry. This is a fully functional firearm, weighing about the same as the original, though not recommended for frequent shooting of full power loads due to its weaker brass frame. I actually use this revolver as a paperweight and it sits on my desk. I do have other steel frame black powder revolvers that I shoot. I just added this to my collection because I liked the brass frame. It is a very pretty firearm and extremely well made.