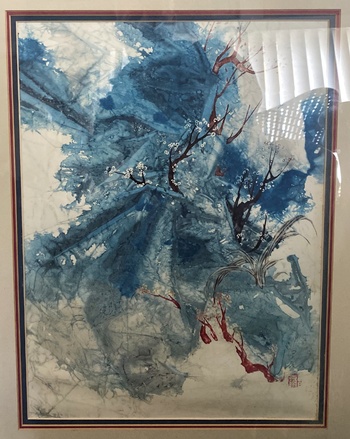 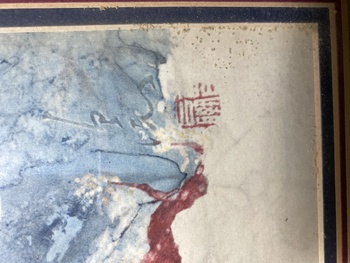 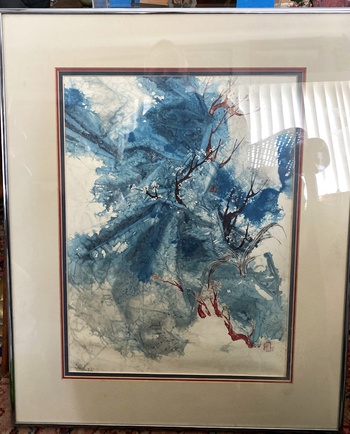 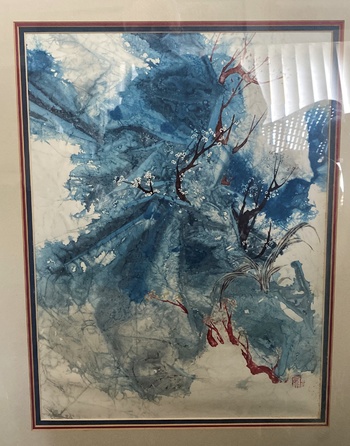 I found this at mny favorite second hand stores in berkeley the other day. Someone on the Identify and value my painting FB site helped me id the artist. I think it's very beautiful.

Signed original watercolor on paper painting by Pang Tseng Ying (1916-1997 China / United States). i found the following info about him. His pieces have achieved some very high numbers at Christie's in the early 2000s.

Born in Tokyo, Japan, in 1916, Pang grew up in Peking, China, where his mother, a medical doctor and an amateur artist, taught him the rudiments of brush calligraphy. By the time he was eight years old, he had progressed to the point that she arranged for two tutors to come to their home to teach him both calligraphy and painting. At 18, Pang entered the Chunghua College of Art in Peking, he received a scholarship to the Nippon University in Tokyo, where he earned his Master’s degree in Art. After receiving his Master’s degree, Pang returned to China, where he taught art and painted for the next 25 years.
In 1954, the National Association of Women Artists sponsored Pang’s first New York one-man show, at the Argent Gallery. His works, done in oil on paper, had been exhibited previously in Mainland China, Taiwan, and Japan. In the early 1960’s, Pang gave up oil painting and returned to watercolor.
In 1966, with a grant from the Asia Foundation, Pang and his family emigrated to the United States. Major exhibitions then followed. In 1966 and 1967 alone, Pang exhibited in the annual shows of both the American Watercolor Society and the Allied Artists of America; his paintings could be seen on display at the Brooklyn Museum, New Jersey State Museum in Trenton, and the Berkshire Museum in Massachusetts, and he had five one-man shows in galleries around New York City and Detroit and a one-man show at the Hudson River Museum in Yonkers, New York. Since then, he has had more than 50 one-man shows at major galleries throughout the United States, Switzerland, and Venezuela.
After living in the New York/New Jersey area for nearly twenty years, Pang moved to Maryland in 1985. He died in 1997.