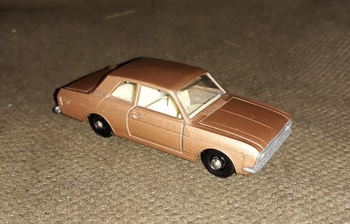 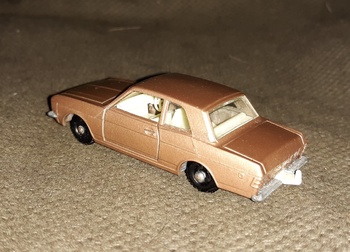 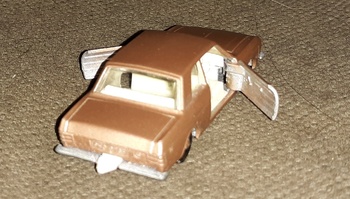 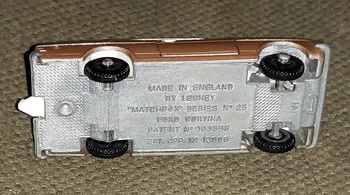 This actually the Ford Cortina Mark II but the Mark II was left out on the car, box and catalog so it is just called the Ford Cortina. This model was released in this configuration in 1968 and 1969. After that it became a Superfast in 1970 and 71.
A nice thing about Matchbox Cars is that they would often make models of cars that were rather mundane. Not every model was a sports cars, luxury car or heavy equipment. also not just American cars. As Matchbox aka Lesney was a British company many of their models were British.
The 1:1 version of the Mk II was made from 1966-1970. The engines ranged in size from 1.2L to 1.6L so this wasn't the Mustang. There were variants but this model seems to be the basic 2 door model.
The underside of this model shows some important details. The front wheels have Auto Steer which means the front wheels steer when the car turns using hand pressure, plus a suspension of sorts. Behind the front bumper there is a spot to hook up a tow truck. Matchbox cars often required towing. Also there is a trailer hook so the various Matchbox trailers could be hooked up.
Next week will be another mundane Matchbox but much older and with the box.