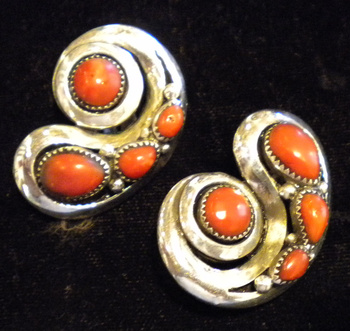 These paisley shaped earrings made of coral set in sterling silver are wonderful. Each earring is made of 20 separate handmade pieces. Frank Sr. was magical in the way he was able to construct his designs out of so many pieces all soldered together. Anyone who has made jewelry in silver knows that the more soldering operations the more chance of the project going awry. Especially in the small area of an earring!.
Frank Sr. Took a trip to his native Italy, his only trip back to his native country, in the mid 1950s. While he was there he visited Torre del Greco and bought Italian cut Mediterranean coral in such great quantities that I still have a little bit of it left to work with almost 65 years later. My father ,Frank Jr, went to Torre del Greco in the 1990s where he found the same company my grandfather had bought his coral still in business. Dad took the original receipts to show them and they all laughed at how cheap the coral was back in the 1950s.