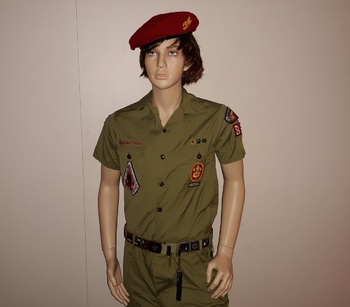 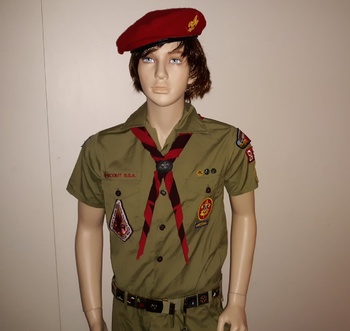 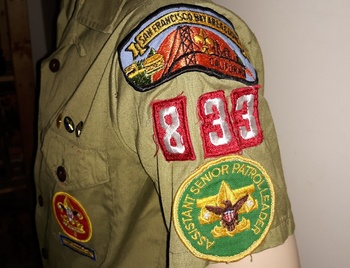 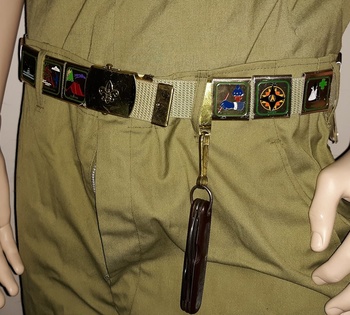 I am not sure exactly when this shirt was the official BSA shirt but it was a rather short time. Perhaps 1978-1981. I think the de la Renta uniform became official in 1981-82. This shirt shows the transition from the earlier green shirts used for over 50 years to the tan shirt.
This shirt was made to be worn or without a neckerchief as seen in photos 1 and 2 (feel free to vote). The earlier shirts were collarless (there was also a version with a collar) so they had to be worn with the neckerchief. This shirt was a fairly radical change from the previous but basically it is the same green color and the buttons are in pretty much the same place. Aside from the top button which is set further back and buttons into a loop. Also it doesn't have the reinforced placket (that's where the button holes are). I believe this is called a French placket.
Now for some other exciting particulars. Our scout is an Assistant Senior Patrol leader. That would be the 2nd highest rank in a troop. Troops are made up of Patrols and the highest position would be Senior Patrol Leader. Not counting the Junior Assistant Scoutmaster that is. This scout is a first class scout, a bit low in rank for an Assistant Senior Patrol Leader.
Last are belt awards. These were not popular as they were uncomfortable wear but they were around for almost 20 years. The shirt and belt awards were part of my briefcase full of scout stuff.
Rose Bowl tomorrow we shall see what I get.