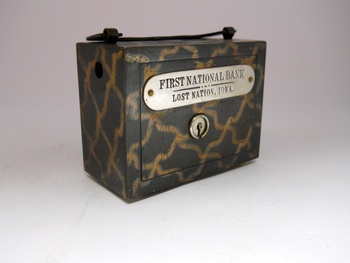 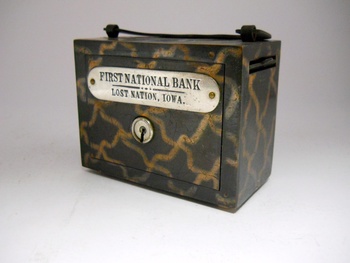 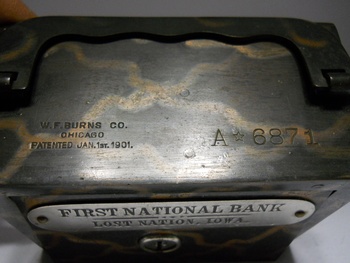 It's being 3 years since my last post that's feature a promotional steel bank from my collection, now i decide to post few in the current month just for some member there not to boring with my Banking Memorabilia yet,,,,,,LOL
Rare Bank, rare finish and very small town, with some interesting history for sure.

One tale of how we got our name!
Lost Nation named after Indian Tale?
Much has been said and written about the origin of the town’s name, Lost Nation. There are various and conflicting legends but the one of the tribe of Indians appeals to many. A tribe of Indians pitched their camp where the town site now stands because of the natural advantages: deer, bear and wild turkey abounded in the woods to the north; buffalo, antelope and prairie grouse on the south; with only a short march to the Wapsie where fish were plentiful and in the center of a rich country, the tribe prospered. It became rich in ponies, pelts and population. This prosperity awakened envy and jealousy. Many tribes coveted their hunting ground and several tried to take it by force.
The chief, a crafty leader, when in danger of attack would retire his band to the inaccessible cliffs around Bear Creek where he and his warriors kept in hiding until the invaders could be safely surrounded and as surely defeated.
This strategy succeeded a number of times. They were left in peace and the tribe became known as the “Boss Nation, ” but by the Indian name. When the first settlers arrived, a friendly Indian told this story of the tribe, which had migrated west. The name “Boss Nation,” in the retelling of the story because of the disappearance of the tribe, became Lost Nation and the name still lives to this day.
(Reprinted from an April, 1927, newspaper article)

ENJOY, and thanks for viewing.
Alan