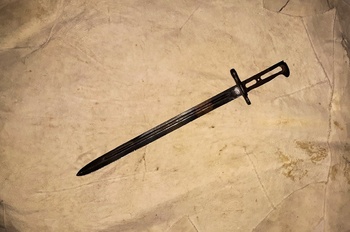 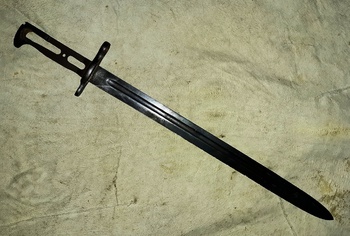 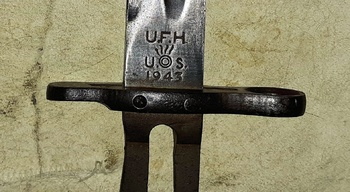 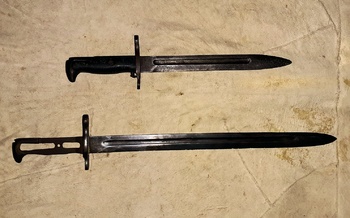 I have been looking for the M1 Garand long bladed bayonet for a few years but none at a good price until last Sunday at the Rose Bowl. This example is missing the handle but the blade is in good shape. It has been sharpened but sharpened properly. Often these have rounded ends and the edge has been removed by over zealous sharpening like a grinding wheel or file. Hopefully I can snag one these ruined blades cheap and put the handle on this one.
This bayonet was made by Union Fork and Hoe (UFH). A company that began in 1907 and ended in 1993. Their bayonets seem to be what they are best known as almost all links go to the bayonets. The stampings above the tang are especially clear. Shows the flaming bomb (great logo) along with the date and U.F.H. There was also American Fork and Hoe who also made this bayonet.
In the last photo I have the shorter version made by Pal. Parts are interchangeable on these as the US military was very strict about this. Even US aircraft and tanks had to have interchangeable parts regardless of who made them and that worked out rather well.
Now to see if I can find a fork or hoe made by UFH or AFH.