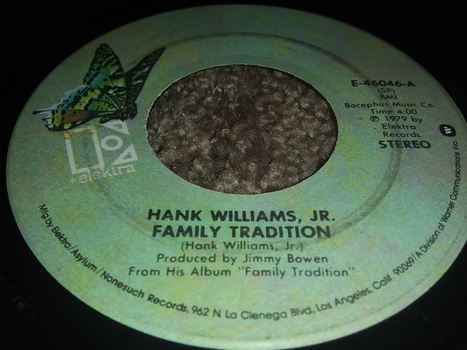 Hank Williams Jr., Born in 1949 in Shreveport, Louisiana while his father, legendary country music performer Hank Sr. was on the road.
Due to who his father was, Jr. grew up heavily influenced and bred to follow in his dads footsteps, appearing at age 8 on The Jimmy Dean Show and the variety show Shindig.
From 1957 up until around the early to mid 1970s, Williams became his father's impersonator, singing and playing mostly his dads songs.
Later, Hank would become influenced to change his musical direction by those in country music that were called the outlaws, like Waylon Jennings, Merle Haggard, Johnny Cash and others. He even severed ties with his Mother at the time, of which a reconciliation was made later.
In 1975, while vacationing in the state of Montana, he took a serious fall while climbing on Mt. Ajax. It took him two years to recover from his injuries and he had to learn to sing and play again.
This single you see, 'Family Tradition', 1979, would be the turning point in Hank's career for a new style and persona for him, though he knew he would forever be in his Fathers shadow.
Today, at age 70, Hank splits his time between his farm about two hours from Nashville, Tennessee and his home in Cullman, Alabama.