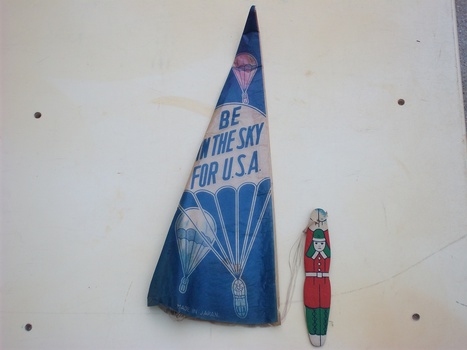 Here is a Japanese toy that was made about 1939.
It came from a little store on Deer Park ave in Babylon, long Island that specialized in imported items.
Usually, they did not stock many toys, but lots of small carved ships, tiny dioramas, figures and doll sized tea sets that were made in China and Japan. These were very popular shelf decorations when I was a kid.
I bought the last three parachutes for a dime 1954.
The store owner told my Mom that they were from before the war (WW 2). I never tried them out.
The bottom edge of the paper (rice paper I think), shows some slight decay, but the chute has never been opened and the shroud lines and figure are in pristene condition. The figure looks like a pre-war Japanese paratrooper/soldier.

As a kid, I saved some of the fragile things I bought because I knew from prior experience that they would be destroyed when used.

I wonder if other people saved items like I have.