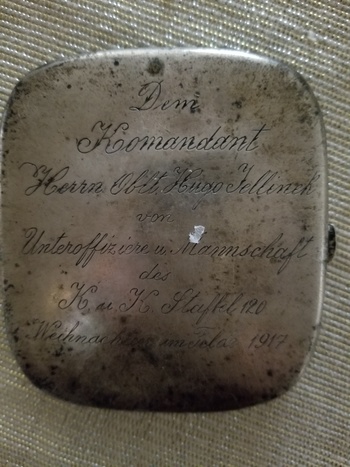 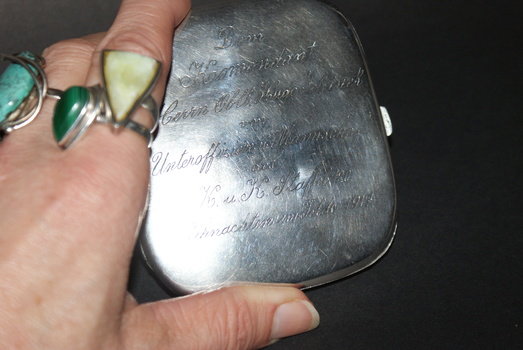 I found this cigarette case and usually I would have passed mainly because I don't smoke. It had a paper label on the front and therefore I could not read the whole inscription. Having a background in history, I was drawn to it, but it proved to be a lot harder for me to figure out what it means, mainly because I don't have any knowledge about the organization of an army.
It is in German and reads something like this:
For the
commander
Mr. First Lieutenant Hugo Jellinek
from
Sergeants and Team/Crew
Of
K and K (possibly kaiserlich und königlich - Imperial and Royal) squadron (I am not sure if this is correct) 120
Christmas in the field 1917

I have a few questions (in no particular order):
1. The word "Komandant" is supposed to be spelled with two "m"s. There are other languages where the word is spelled with only one "m". This could be possibly a Serbo Croatian connection.
2. The last name could be different. I cannot be sure if the first letter is a Z, J, or something else
3. K and K points into the directions of the Austrian Hungarian Empire, therefore the German language.
4. Staffel/squadron 120 is a mystery for me; I could not find such a thing so far. I did, however, find a division of the Austrian Hungarian forces into an A-Staffel and B-Staffel. There is a lot more to be researched and learnt.
5. "von Unteroffiziere", in my humble opinion, should have the letter "n" at the end of the noun to be grammatically correct.
6. "des K u. K Staffel 120" should be "der...". If I remember correctly, the grammatical rule is, that for possessive, die nominative articles der, die, das (for masculine, feminine, and neuter nouns - lucky English speakers don't have to worry about this) change to des, der, des, respectively.
Because the word "Staffel" is feminine in German, the article should be "der". That could be a simple mistake because many people know how to speak a language but don't know how to write it properly. I would think, however, if one gives a present to a superior, one should try to make no mistakes. One possibility could be that there was one other noun, but for some reason it wasn't written down. Alright, enough speculations!

The case is marked twice for 900 silver. The other marks are hard to read. Twice, as well, I found a little cartouche with what I believe to be "K & W". There is also one mark with a kind of symbol but I have no idea what it is.

Checking inside of the case, I found a name scratched in. I can read only the first two words. The third part is illegible.

There are some dents in the case and the elastic bands to hold the cigarettes in place are missing.

Any comments would be greatly appreciated.