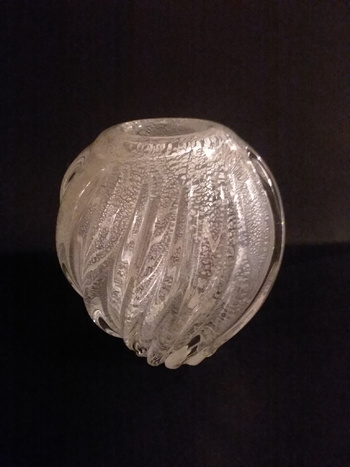 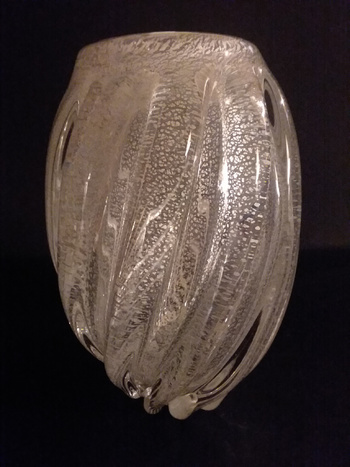 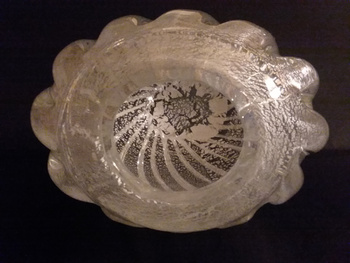 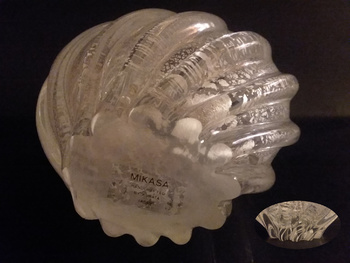 This vase is 7" high x 6" long by 4" wide. The base is ground flat and smooth, not polished but matte. It came with its original metallic silver Mikasa box, which I forgot to photograph. Kurata made this vase in several sizes. I think this was the smallest version, weighing in at a svelte 4 lbs 2 ounces. The design was by Larry Laslo, American designer for Mikasa, and appears to be a pretty close copy of a vase attributed to Archimede Seguso (AS). I could not find a good source to support this identification of AS as the designer but found an example with a label which reads "Archimede Seguso Murano Made in Italy". Both my vase and the Seguso vase have 12 ribs.

At any rate, it is a close enough copy by Laslo that about 90% of the vases I found using a Google search for "Seguso Pillow vase" were vases which were probably made by Joetsu Crystal Glass Company, as Kurata is actually a brand name of Joetsu's glass.

Mikasa owned this design by Laslo, so could possibly also have had vases made by other Japanese makers or even makers in other countries. For example, I have an older large crystal Florale vase marked "Mikasa Japan" but have seen other boxed examples which have "Made in Czech Republic" on them. I have also seen these "pillow" vases in peach colored glass, opalescent white glass and opaque white glass. All nice vases, I think, but maker is uncertain if not labeled. If the base is matte finished, however, it is probably not a Seguso vase but more likely a vase made for Mikasa.