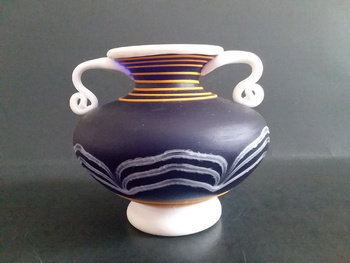 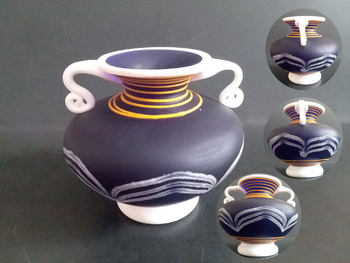 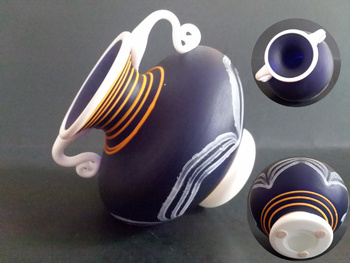 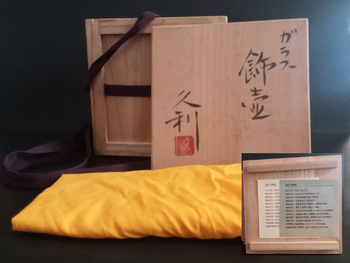 This small jug or vase is about 4" high x 5" diameter. It came with the signed tomo-bako wooden box. This is an original piece made by Iwata Hisatoshi. It is a deep purple/blue color with white and yellow accents. There is an ukon-fu (tumeric cloth) to wrap the jug in and a sanado-himo (flat string) which feeds through holes in the base to tie the box shut. There is a printed label attached under the lid. I purchased this piece from a buyer for Christies. She is Japanese and was selling off some of her personal collection.

Iwata Hisatoshi 1925-1994 was born in Tokyo, the eldest son of Iwata Toshichi, the father of modern Japanese art glass. Iwata studied at the Tokyo Bijutsu school in the design department. He graduated from the prestigious Tokyo School of Fine Arts in 1950. He was selected for Nitten (Japanese Fine Arts Exhibition) for the first time in 1949 and continued to exhibit there afterward. He inherited Iwata Industrial Art Glass which his father founded in 1953. Iwata established the Japan Industrial Arts Society in 1972 and was its chairperson afterward for five years. He was a founding member of the Shiseido-sponsored Exhibition of Modern Industrial Arts (1975–95), submitting works for display eighteen times up until 1993. His work was added to the permanent of the New York Metropolitan Museum of Art 20th century Design and Architecture section in 1986. His work is also part of the collection of the Corning Glass Museum. He is also known as Iwata Kuri. Kuri means "chestnut" in Japanese.