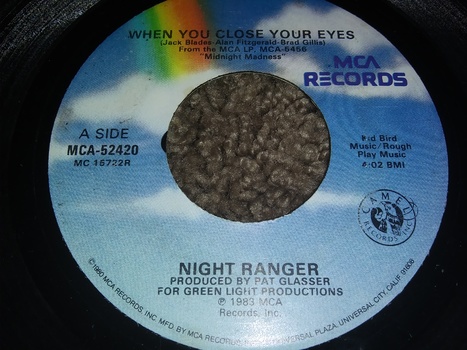 The Group Night Ranger, with one of their many hit singles they had through the 1980s, the 1984 release of the song, 'When You Close Your Eyes'.
Night Ranger originated in the Heart of San Francisco, California in 1979 and first went by the name 'Stereo'. This was soon changed to 'Ranger', then Night Ranger.
They put out a many of records and still do. Their newest is a 2016 LP titled, '35 Years And A Night In Chicago'. They still continue to tour.
Now, a little tidbit for you and some of you will remember this...
During a Ozzy Osbourne tour, lead guitarist Randy Rhoads suddenly passed away. After canceling some shows, Ozzy decides to go back on the road not long after Randy's passing and for a short tenure it is lead guitarist Brad Gillis of Night Ranger that fills in for Randy at Ozzys request.