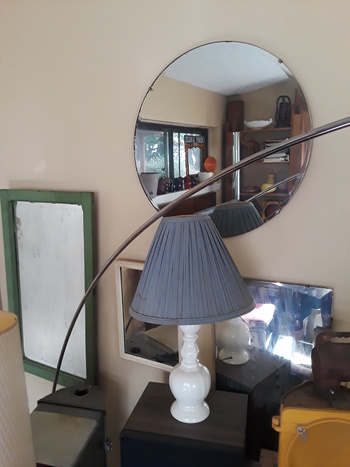 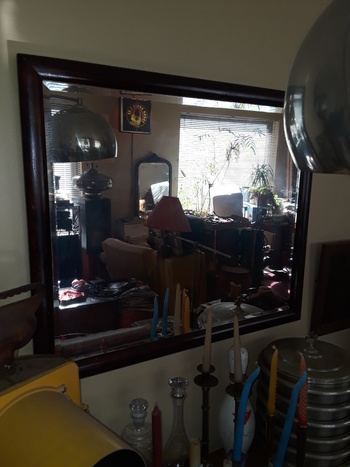 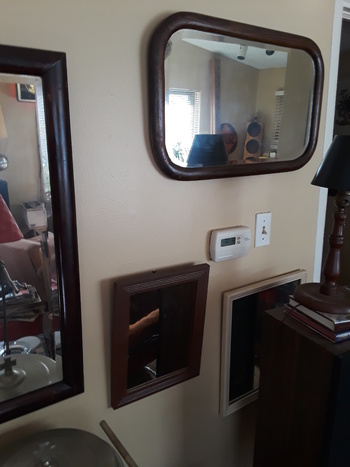 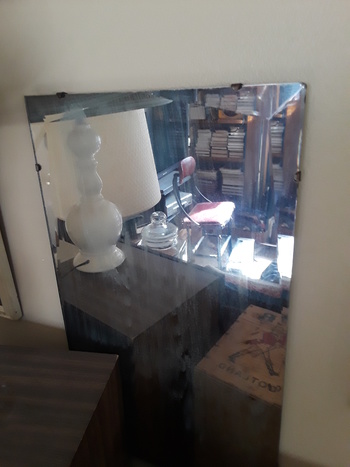 FIRST -- it turns out that it's really hard to take decent pics of a bunch of mirrors hanging on a wall. <banghead> One way or the other, there was a particularly sunny moment yesterday when I tried again, after my last attempt (after the sun had gone down) didn't result in any pictures I deemed showable. (and not that these are any better, but at least have natural lighting...that's an improvement unto itself from the last try??)

SECOND -- please attempt to ignore all the other general clutter and piles of crap and other stuff that might or might not really need to be in my living room, but nontheless *is* there at the moment and thus reflected in the pics of the mirrors... <groan>

BUT ANYWAYS. Going back to the recent 'show us your walls' thing, here's most of my "mirror collection" as currently hanging. The display (as with the rest of the room) is most definitely still a 'work in progress', as I now have at least two more largish further mirrors to be added here, to more completely fill the wall from 'furniture level' (or slightly below) to the actual ceiling. (oh, and all the rest of the other spurious crap that needs to get moved somewhere else, but all in good time... <giggle>)

FROM THE LEFT, pic #1: in the ugly green painted frame (oak underneath that) is roughly 20" x 23" and has beveled edges. It still has old hardware on its backside to suggest it was once part of a dresser so it could be tilted up and down. Above that is a 2' (ish) diameter also beveled round one, it has no 'frame' per se, instead just clips to hold it to a masonite (?) back. Underneath the round one next to the green one is a 12" x 16" "shaving mirror" (?) that's probably not uncommon in any way, I think its frame is actually just pine or something under its paint. The next one on its right is actually one of my favorites of the whole bunch -- it is likewise 'frameless' like the round one, but has a most interesting 'triangular' kinda pattern to its beveling (along with deliciously lovely 'age streaking' to its actual mirroring) in that its edge beveling *isn't* actually parallel to the edges of the mirror, but actually wider at its corners tapering towards the middle of each side. I've never seen another like it, and pic #4 is a meager attempt to show its beveling closer up. It measures ~14" x 24".

Pic#2 is the largest 'centerpiece' of the bunch. It was a prize from a church rummage sale a few years ago (for an amazingly cheap price?!!) and remains in exactly the same condition as found in its beautifully grained (though now kinda hidden under old varnish or whatever, prolly original but you have to look close to see it?) wooden frame. It measures 31" x 37" and is even heavier than one would guess it'd be...its gotta be one h*ll of a substantially thick chunk of glass in that frame.

Pic #3 shows the next/last 3. On top is a 16" x 26" beveled 'rounded corner' example in a likewise lovely grained quartersawn oak frame, also in its original finish. Like the 'big one' to its left it is no doubt an oldie. (1st qtr, 20th c. I've gotta think for both, if not even one or four more of the rest?)

Under it is one more little 'shaving mirror' -- it is ~ 11-1/2" x 15". Its frame is actually 'golden oak' (prolly quartersawn too, as seen from the backside which didn't get painted) despite the boring brown paint (which I didn't do to it) now on its front, this one is also particularly curious (and maybe even actually older than *any* of the rest of 'em??) because its glass is **not** perfectly flat and uniform like all the others -- instead more like antique window panes in hundred+ yr-old buildings/homes which have little 'flaws/bumps/imperfections' in their surfaces, despite this one being mirrored on its backside. Next to it nearly hidden behind the stereo speaker (under the thermostat and lightswitch) is the last one of the current grouping, it is an otherwise rather nondescript (but also obviously kinda oldish, in a narrow white painted frame) prolly 'shaving mirror' rescued from a junk store for cheap.