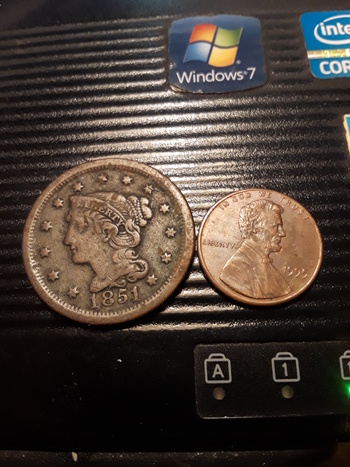 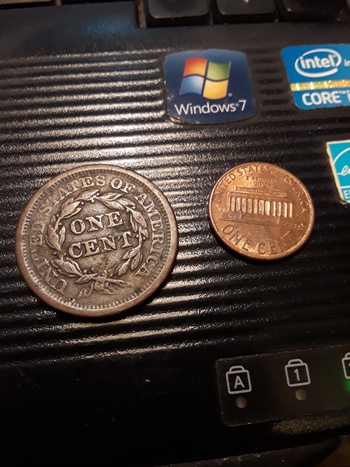 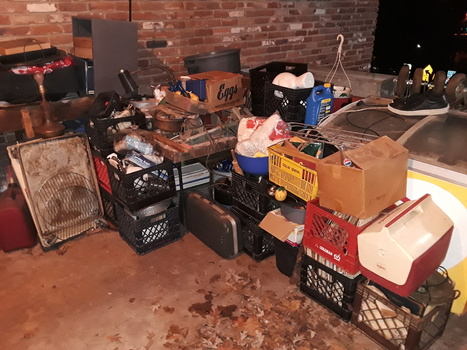 With only one quick little item to show today -- this interesting 'oversize penny' coin. I don't even know which container/box/bag/pile it fell out of -- while I was otherwise just dragging one more binful of mostly filthy/infested clothes and (true!) junk out to the curb, I glanced down and it was laying on the floor all by itself. Naturally, of course, I picked it up, glanced at it, and stuck it in my pocket...?? ;-) :-)

Now having looked a little closer at it, I can confirm without a doubt that I do not have the *slightest* idea what it actually IS. Looks like an old penny (I think, I'm not and never have been anybody's expert in coins/tokens/etc) except that its more the size of a quarter. Pictured with a standard Lincoln penny for size reference, both sides of each shown in their respective pics. The only 'cleaning' it has had is the hour or two it then spent in my pocket with a few other random coins.

Anybody gots a clue what it is, where it came from, or how old it really might be?? The date 1851 appears on its front, but I don't guess its really anywhere nearly *that* old -- its gotta be some kinda oversize 'reproduction' of something, no...?? (instead of any coin which was ever 'legal tender', that is?)

LAST PIC HERE just for fun, is the ever-growing pile in my carport of "stuff" which keeps following me home from this house cleanout thing...several more milk crates (etc) now added to the pile just an hour or so after today's trip over there. All those crates (and baskets and buckets and boxes) are the 'new junk' for the most part, or at least the most concentrated pile at this instant. [I've already emptied several cratesful of glassware etc, and there's also a few 'bagsful' of mostly textiles (numerous leather coats too) that aren't seen there, plus several other assorted items that have already found their way into the house or elsewhere)

All the crap piled up there includes lots of dishware/glassware (new and old of all sorts, lots of Pyrex, and lots of 'pretty serving dishes' of all kinds) and cookware/utensils including a growing bucketful of cast iron (some enamelware too) and lots of assorted tools and hardware stuff (also old and new) plus 3 cratesful of (mostly) LP record albums. A few interesting books (more piles of those to look thru) and there's a brass tenor saxophone in the gray case lower center. Today I found a handful of old wristwatches...one actually looked like it says ROLEX on its dial, but it otherwise didn't seem like that should be right, we'll see whenever I unearth it again...there've been a few interesting little jewelry items discovered too.

AWW, LAWDY LAWDY LAWDY...WHAT THE CRAP AM I GONNA DO WITH IT ALL...??? <LOLOLOLOL> My partner (who's responsible for the whole thing happening in the 1st place BTW) has already remarked to the order of "what *are* you gonna do with all this" along with veiled accusations of me being a hoarder...but also while asking "are you having fun discovering/bringing home a new (FREE!!) load of 'treasures' again today?" while meanwhiles a little bit more of the back end of my truck is left sticking out from under the roof every evening...?? <giggle> 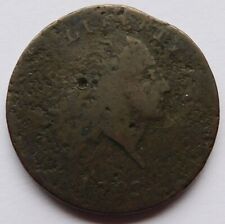 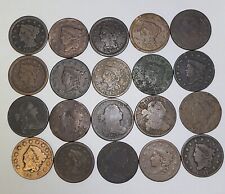 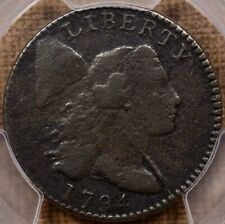