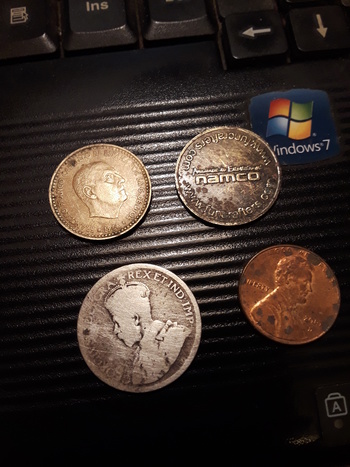 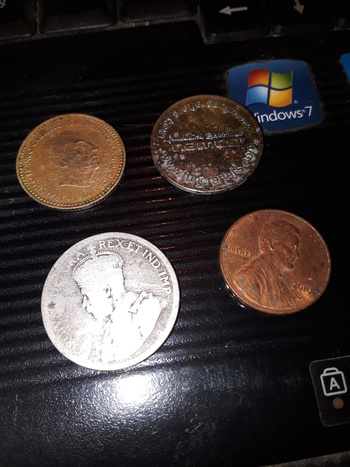 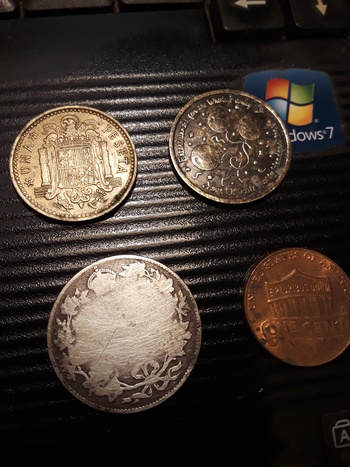 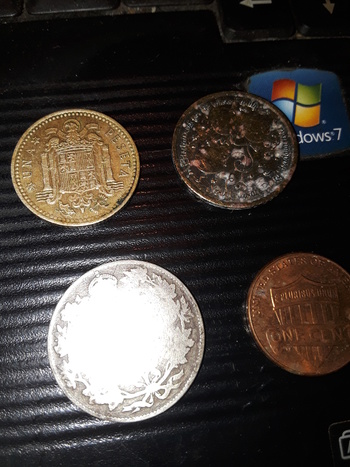 A few more interesting 'old coins' found in odd places while cleaning out somebody else's house. [don't EVER forget to look in the bottom of a coffee cup otherwise full of pens and pencils?!! ;-) ] All 3 needed a little scrubbing (as gently as possible) in order to make out what they even *were* -- when found the only thing one could really tell about 'em was that they *weren't* exactly standard US coins. [the Lincoln penny of course is, just for size reference, and is in fact one of the cleanest of the small pocketful or two of those also recovered while rooting around various nooks and crannies and corners...]

Top left side appears to be a 1966 Spanish "UNA PESETA". My only rudimentary Spanish would suggest that means "one peso" (?) and I'd also imagine it remains worth about exactly that to this day. (whatever that translates vs. US pennies?) It is a kinda light 'brasstone' in color/material, likely some variety of 'coin alloy'.

Top right isn't actually a legal-tender coin, instead it seems to be an amusement game token bearing the name "namco" as well as a www. address that doesn't work anymore on one side, and a logo of balloons and lettering "entertainment for the whole family / your [??][??] headquarters on the other. It is likely mostly plain brass.

Bottom right is the most intriguing of all, by its wear probably the oldest too. Seems to be silver, *very* worn, it seems to have kinda "Latin" lettering around its edge on one side surrounding a male head silhouette wearing a crown, (??) but most of the entire middle of its other side is worn flat leaving only remains around its edges seeming to have once been some kind of 'crest' (??) design including ribbons, flowers, and another crown. With all those crowns, I havta think it might be something European, and if its wear is in fact natural, its probably the oldest of the bunch. Suggestions WELCOMED especially on this one, if anybody who does know stuff about old coins (not me?!) recognizes it as something?!!