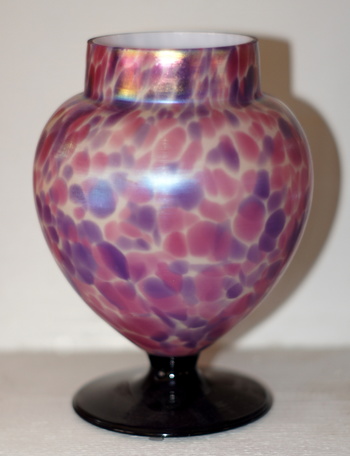 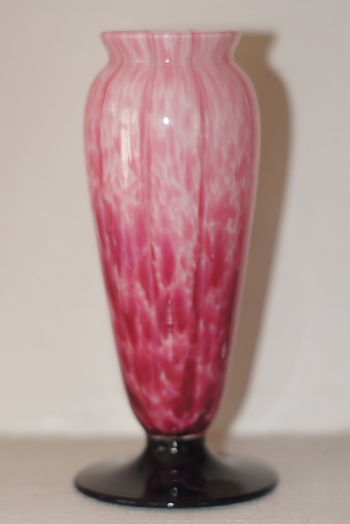 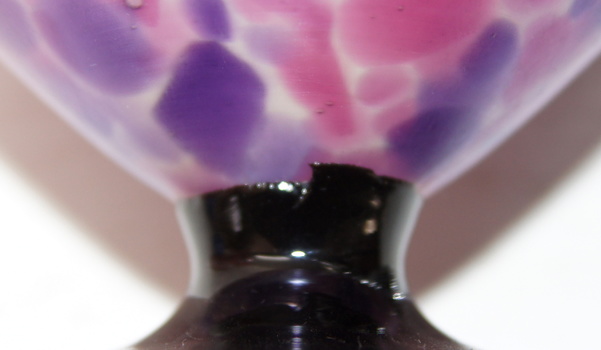 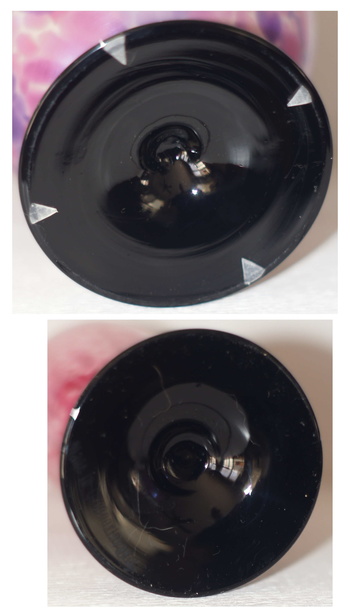 A suggestion in this forum has once again surfaced, presenting the idea that the black feet (or attached feet of any color) on certain types of pieces, along with finials, are possibly made in advance of the other pieces to be applied to production as it occurs.

I am only posting this so that people are made aware of the physics of glass and glass production, so as to understand the inability for this to be accurate. I discussed it previously when it was claimed, and I find myself having to address the issue again.

First, let’s look at some basic science:
Water boils at 212 degrees at sea level.
Common types of glass are primarily made from silicates. Most glass consists of Sand, Lime and Soda.
Colors in glass are developed through the addition of certain elements into a molten batch of clear glass.
Glass, depending on the type, reaches a molten state at a temperature of 1400-1600 degrees F.
Glass is generally cooled down very slowly in an annealing oven whose temperature is reduced slowly over an extended period of many hours.
The reason for that type of cooling process is that if allowed to cool quickly, many types of glass will crack due to temperature variances between the surface and the inner core of the glass.

Most types of common glass crack when at room temperature and are then subjected to an extreme temperature variation quickly.

Let’s start with the idea of filling a drinking glass with boiling water. Most folks are aware that if you pour hot water into a glass at room temperature, that there is a good chance that the glass will crack, or shatter unless the glass is meant to be subjected to heat, such as in pyrex or corning ware. Knowing this, imagine the reaction between a room temperature item, and a 1400 degree item…

First, Let’s look at the reason that this occurs.

If I have a glass that is at room temperature and I fill it quickly with boiling water (212 degrees F) the glass will immediately start to absorb heat from the water. The glass does not all change temperature instantly. What occurs is that the surface of the glass itself will start to heat up and expand (as all materials do when heated), but the interior of the glass does not instantly absorb heat. As a result of this, there becomes a quick disparity between the internal and external temperature of the glass. As the heated surface tries to expand, the inner core of the glass can not move as quickly as it is cooler, and the tension that occurs within the glass itself causes a crack, or in worst case scenarios, it causes it to shatter.

It is the internal tensions within the glass that occur naturally when cooling or heating glass, that are avoided with the use of an annealing oven in production.

If one is not careful in production, these cracks can occur to the objects being formed. As an example, it is not uncommon to find small internal cracks at the contacts points on an art glass pitcher with an applied handle. These are referred to as a heat check. Heat checks occur because of the difference in temperature between a molten handle and a slightly cooled pitcher body. The only way to avoid heat checks in production is to make sure that the glass being applied (handles, feet, flowers, rigaree, edge trim et al) is the same temperature as the main body of glass. Heat checks do not occur the instant that a hot handle is applied to a hot pitcher body. They occur as the two parts of the pitcher cool at different rates, and the internal glass tension causes cracks to occur. Sometimes those cracks are very small, and sometimes they can be catastrophic to the item being produced.

So let’s take a moment and examine the process if we were going to make a foot or a finial (or any other item) in advance of producing vases or other objects, for those pieces to be applied to.

The first step in the process would be to form the foot or finial in a small mold of the desired shape. Once removed from the mold, the next step would be to cool the items to store for later use. Because of the thickness of this type of item, it would be necessary to cool such an item in an annealing oven to prevent it from cracking as it cools, or to prevent it from being fragile if cooled without annealing it. If an items is cooled without annealing it, then certain types of tensions, or stresses occur naturally within the glass. Those tensions cause the glass to be much more susceptible to breaking from normal use. Those tensions can also be the cause of cracks to appear in glass without any apparent reason, and out of the blue, so to speak.

So let’s say we made feet and finials, and cooled them to use for later production.

In order to use such a piece of glass in production, the formed items would require heating up slowly to the temperature of the piece being created. If not heated up slowly, the glass would crack from the inner vs outer tensions cause by the temperature disparity between internal and surface temperatures.

If not brought up to a temperature range the same as the main vase body being blown, when applied to the 1400 degree molten glass, the premade pieces would shatter from the huge heat disparity between the two objects.

So in the suggested scenario, one would make the feet and finials, cool them in an annealing oven, reheat them to approx. 1200-1400 degrees F, and then apply them to the pliable glass object being produced.

So let’s examine what is actually done.

Art glass production, even to this day, is a task performed by a group of people, otherwise known as gaffers. Each gaffer on a production team performs a different task. One will be the individual who blows the main object. Others may lay frit on a marver table, or use paddles and shears to perform certain aspects of the production, or gather a small amount of glass to be used to create a threaded surface on an object. And the orchestration and timing of these individual parts of the production is critical. If the glass cools down too far, it will be reintroduced to the oven to bring the temperature back up to the necessary working range.

One of the gaffers on such a team would be in charge of producing the feet at the same time the main vessel was being created. The final, feet, etc would be molded and then applied to the object. With both of them being molten glass, it would ensure that there would be no damage from temperature disparities, and also enable the fit between the pieces could be as good as possible with both items being pliable and molten. The finished objects would then be cooled in an annealing oven for packing and shipping after they were cool.

The basic physical properties of cold glass and hot glass, combined with all of the additional work (think extra money spent) precludes the premanufacture of parts such as this. The exception to that would be if the feet and finials were glued to the items, which is not the case we see in early Czech production specifically, and in most art glass production in general…. Even today…..

This is not really an opinion of mine, but reflects the characteristics of glass production, the physical properties of glass itself, and the issues caused by temperature disparities in production pieces.

So let’s look at a couple of applied feet on Welz production in my collection and see what they can tell us through a close examination.

The 4th image above shows us the bottom of the two pieces of glass, and there is no indication of pontil work. This tell us that the feet were removed from a mold and punty rod by being cut at the point where the base attaches to the bottom of the vase body.

The macro shot in the 4th image is one that shows that there is a trail of glass where the base attached to the body of the vase. This type of glass trailing would be an indication that the piece would have been pliable and molten when applied to the bottom of the vase body.

All things such as rigaree, threading, finials, flowers, feet, were produced at the time that the individual bases were made. I am only posting this because I feel that people looking to understand glass should understand some of the basic properties of the material…. Properties that have a huge impact on how art glass can and can’t be produced.

Physics are physics, glass is glass, and facts are facts…. No matter how hard one tries to imagine that something different occurs, the materials (combined with an assessment of production costs) dictate how they can and can’t be used in production.

TOD says:
"My intent here was to share a simple foray into possibilities, I am always curious about potential variations and how they might be handled."

My response:
The laws of physics, combined with the physical properties of glass, exclude using annealed production to apply to new molten production. A true understanding of the physical properties of glassand the laws of physics provide insight to the understanding that this is not a real world possibility. The logical question would be if one was to produce, anneal, and then reheat a piece of production to apply it to a freshly produced example, "Why would one go to all the effort to do that, when it is much simpler, quicker, and prudent to simply produce the foot, finial, flower, rigaree et al, at the same time?"

TOD says:
"As far as I have seen and know, it it possible to handle a piece annealed glass (cooled off slowly) and add some newly heated glass to it as long as the point of juncture of the two glass objects are at the same temperature."

TOD says:
"There has very complicated designed glass items, when this was necessary, in the Dale Chiluhy methods."

My response:
Having originally come from the Seattle area, I can assure everyone that the use of annealed glass to attach to a newly produced piece of glass has never occurred in Chihuly production. Also having watched glass production at Pilchuck Glass School north of Seattle (Chihuly founded), all production which occurs by these artists is done with newly melted glass batches regardless of how complicated the piece is.

TOD says:
"As my critic also seems to be a mind reader, and bases his conclusions on his usual negative perceptions about me when I am the target."

My response:
My "target" is not TOD. My "target" is the bad information being suggested as a "possibility" in glass production, when in reality, it is a fanciful production notion which the laws of physics and properties of glass would preclude from being used. My objective, in doing this post, was to help those that are interested, to learn why such a suggestion in infeasible.