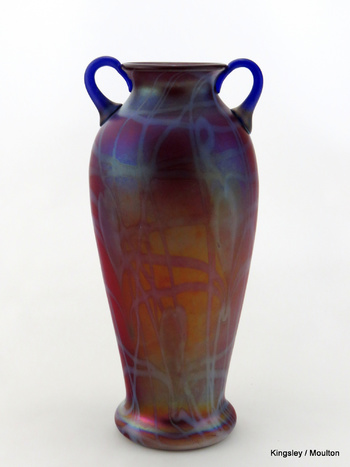 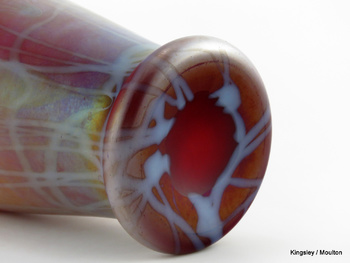 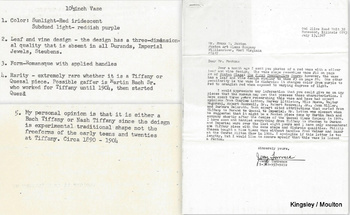 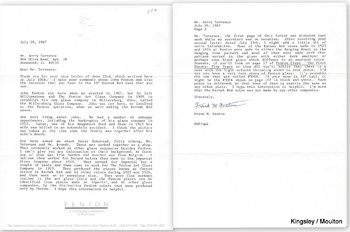 This is our newest arrival, a Fenton 3006 Karnak Red Silver Hanging Heart Hanging Vine vase from the Off Hand line, 10-3/8" tall, ca. 1925-26. These silver heart vases can be found, but they are on the harder to find side of the equation. Whereas most of the applied décor of this type on this color at Fenton was done in black or cobalt blue, the silver is opal (o-paul) glass.

The vase is special enough, but we also received a small trove of material along with this vase that had been owned by the same man since 1984. The ephemera offers a unique glimpse into what it took to research something like this in the time before the internet and digital photography.

Mr. Torrence purchased this vase in April 1984 for a total of $96.30, tax included. He then set off on a three year research journey that included gathering the opinions of several giants in the area of Art Nouveau and American Art Glass before finally landing two letters onto the desk of Frank M. Fenton. Among his contacts were these people:

--- Milo Naeve (d. 1931-2009), who built the American Art collection, and raised the profile of American Art overall, at the Chicago Art Institute.

--- Robert (Bobby) Rockwell Sr. (d. 1911-2009) was a major collector specializing in art of the American West, toys, and Carder Era Steuben Glass. His Steuben collection was over 2,500 pcs when he passed. That collection is now housed in the Rockwell Museum, a Smithsonian Affiliate Museum, in Corning N.Y.

--- Barbara Deisroth, who established the 20th Century Works of Art Department at Sotheby's (Parke Bernet) in 1972 and is an expert in Tiffany Glass.

--- Charles Lotton, renown American studio glass artist and the one person out of all the experts who thought of Fenton.

--- Frank M Fenton, the man who brought it all together for Mr. Torrence after a nearly 3-1/4 year search.

I have included photos of both sides of one 3 x 5 index cards with notes from one of the experts. Also included are one of the two letters that Mr. Torrence wrote to Frank Fenton. The other letter mentioned was not included with what we received. Although there is more, we have shown enough to provide an idea of what he had gathered.

While going through this I was thinking of the time, effort, expense, and emotions involved in his research. There was buying all of those photo reprints (not shown) after the initial cost of their development, something we don't have to worry about today. He had to type all of those letters and wait on the responses via mail. There was cost of at least one certified letter, return receipt requested, that we have the original receipts for. Finally, imagine the elation when the mystery was resolved.

Mr. Gerald (Jerry) Torrence was a high school English teacher who was loved by his family, friends, and students from what I read. He was also an authority in Chinese Art and Iconography. 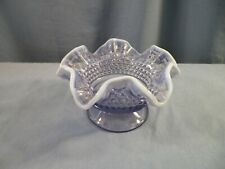