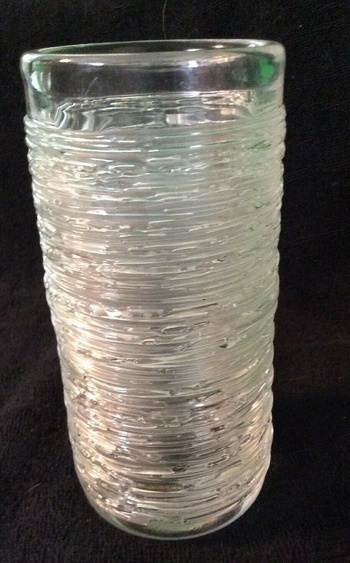 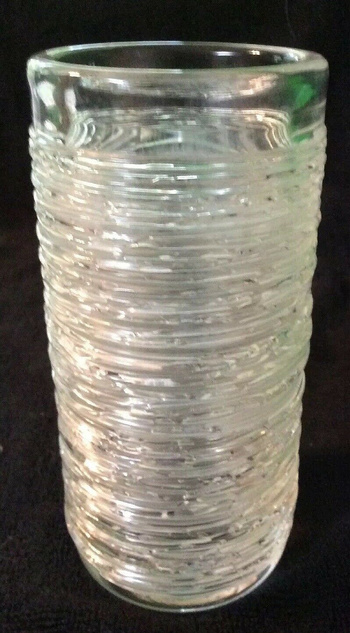 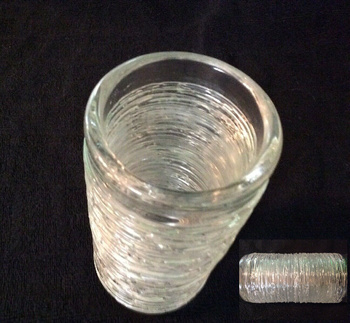 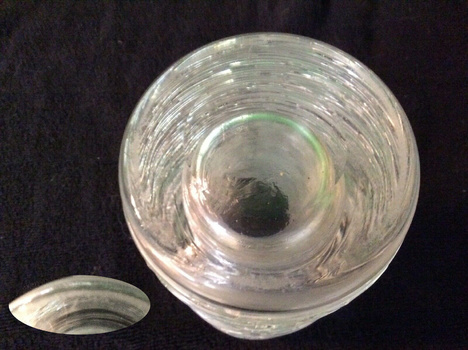 This vase is 6" high x 3" diameter and it weighs 2 lbs 7 ounces. It is fairly thick. There is a ground and polished pontil mark and the bottom is polished and possibly ground, as well. It is indistinctly signed on the bottom. It reminds me of a Frantisek Vízner whirlpool vase except for the ground pontil and the fact that glass is not cased over the whirlpooly part. I have never seen a Vizner vase which was not cased. This is the fourth day of my cold, so going back off line and my responses may be a bit slow..... I am not a good patient.

Thanks to twentiethc for identifying the signature and maker of this vase.

"Skruf was founded in 1897 by a former manager from Johansfors, Robert Celander. The company went bankrupt in 1908 and re-emerged from bankruptcy in 1910. A fire completely destroyed the glassworks in 1946, but the company managed to return to production only one year later. In 1974 Skruf joined Krona-Bruken AB who went bankrupt in 1977. Kosta Boda then bought the company but closed it in 1980. However, a group of glass blowers reopened the company in 1981. Originally, the company produced mainly simpler drinking glasses and preserve jars. From 1910 onwards, they produced n extensive line of tableware. Most pieces were designed by Magni Magnusson, until 1953, when Bengt Edenfalk joined Skruf as the chief designer. While at Skruf, Edenfalk developed the famous Thalatta technique, which is similar to the Ariel technique, but more difficult to master because the design is applied while the glass is hot. Edenfalks left Skruf in 1978 to work for Kosta. Other designers who worked at Skruf are Lars Hellsten, Ingegerd Raman and Anette Krahner. "