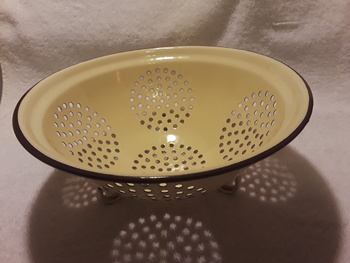 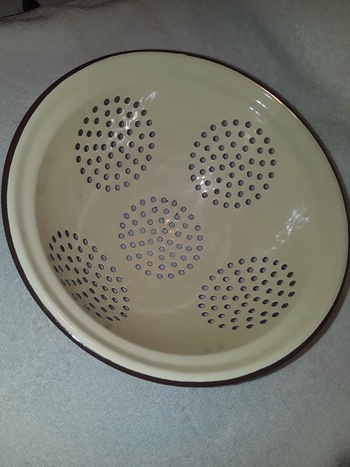 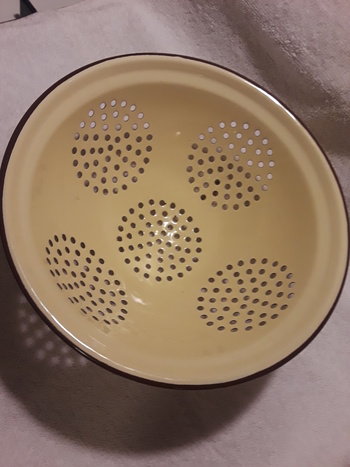 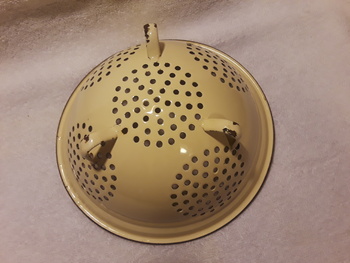 I do *not* know whether this is in fact an "old" item or not. Frankly when first found I kinda thought it was -- but turns out what at first glance appeared to be possible random 'wear/rust' spots on it (which might truly indicate its age?) ended up being only caked on various "grunge" which did in fact clean off of it surprisingly well. Its only 'enamel damage' seems to be just on its 3 little feet, as would be expected from any enamelware thing like this with feet like that...?? It measures about 9-1/2" across and 4" deep.

Its color scheme (which pics don't quite catch accurately, flash or not) might be another clue to suggest it could be newer than I first guessed, being a kinda 'off white' overall with a thin brown band around its outer rim. To my meager knowledge of such things, that wasn't ever a common "old" color combination...??

Oh well, now that it is cleaned up I'll still probably be able to *use* the silly thing every so often anyway...I really *did* need a better colander than the pitiful plastic bit I've otherwise used when I needed something like that, which can now "go away" without a 2nd thought...?? <lol>