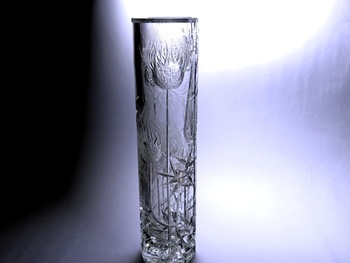 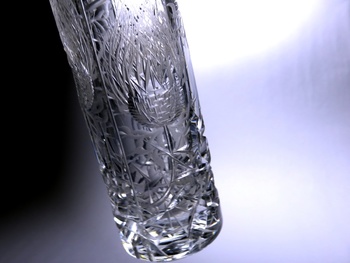 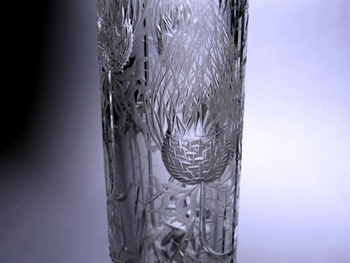 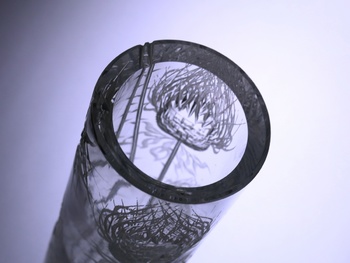 I was very fortunate recently at our monthly collectibles market to find this vase. I didn't know who had made it and couldn't read the signature, I just knew it was special. I bought it for what I now know is a bargain price.
Some very knowledgeable people have given me info regarding the designer and maker. Many thanks to them, esp. Jindrich Parik.
Our own Vetraio advised he thinks the series is called "Distelmotiv", being distel as in thistle.
The vase was designed by Jirina Žertová, a very talented artist whose work has encompassed sculpture, art design, and art glass. She is still a working artist and she mainly now produces sculptural glass with many layered, painted and coloured surfaces. Incredible stuff.

The vase itself was cut by Josef Švarc, a talented engraver who worked in various Czech glass houses from 1951 until around 1990. His work has been described as 'an excellent and sensitive engraver and cutter with a sense of detail. Has designed and realised numerous exacting works of a unique nature’. His skill is really obvious in this vase with it's delicate cuts and various layers giving the thistle life.

The vase itself is large at just over 32cm, and being crystal is weighty. It is signed to the base J Svarc, and I have been advised that this means the vase was engraved during Svarc's time at Podebrady, and not after he had left.
It dates to around 1960.