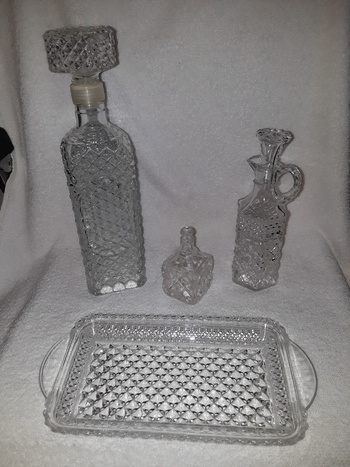 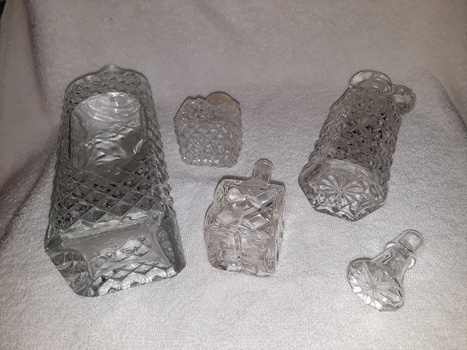 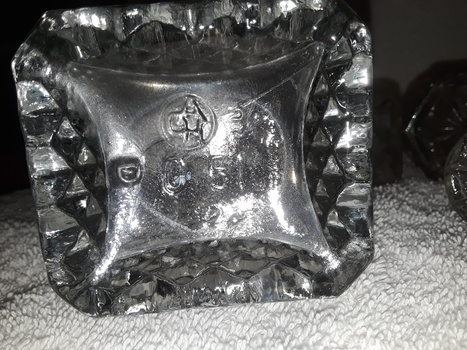 Or at least that's what I'll call these things for now -- more stuff recovered from various disgusting corners in the 'cleanout house', now looking much more presentable after a trip or two thru the dishwasher. ;-) :-) These are the ones I think I already mentioned when showing a little glass serving tray and a butter dish last week, which might or might not be also at least a 'semi-matching pattern' to any of these. (??? clues *welcomed if somebody *can* ID any!! <applause> )

Pic #1 shows 'em with the tray for general comparison. #2 shows these five items by themselves laid sideways, #3 is my best attempt at the Hazel Atlas logo on the decanter. (if I've learned anything around here lately, I think it's how to recognize *that*??) :-) ;-) :-)

The decanter is about 11-1/2" tall X 2-3/4" square, including its what is really a 'screw on' stopper with plastic bits to accomplish that part. There is a flat oval shaped surface on the center of one side which might have held a label sometime. In addition to its H-A logo the most prominent marks on its bottom seem to be an "0.5 l(itre)" mark, along with a few various otherwise sideways (that'd probably tell somebody besides me how old or not it really is) letters and numbers. ;-) :-) In pic #2, its stopper is the one in the background.

The little "cruet" is only a little over 6" tall itself, about 7-1/2" with the stopper (that I've pictured it with here) and is hexagonal in overall shape, about 2-1/4" across. The stopper is actually the one recovered (where I still contend it absoultely *did not* belong) sitting atop the old Scotch whiskey bottle I also showed last week -- it took a couple more days digging to actually find the cruet itself, which really *does* look much more like this stopper is supposed to fit...??? I'm guessing it also had a little plastic bit on its end to provide a seal for the contents.

The last (remaining so far completely "orphaned" stopper?) is a little under 2" cube shaped, about 3-1/2" at its longest. Somebody sometime took the trouble to wrap it in newspaper in one of those grungy 'attic boxes', but if there was ever any sort of matching container also in there for it it either got used (independently, then busted/thrown out?) or carried off somewhere else by the rats... <eeek><nono> It does actually have a number "22" molded on it where its stem meets its body, but that's it for marks.

ONCE MORE -- I'm not under any particular impression that any of these things are notably old or unique in any way whatsoever, just kinda fun sparkly glass bits that might find themselves to a sunny display shelf somewhere sometime. [or one *h*ll* of a garage sale, ifn's I thought I had the energy to do THAT...??? <rolleyes><LOL> 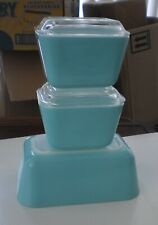 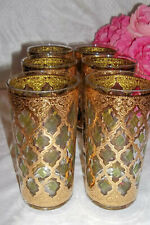 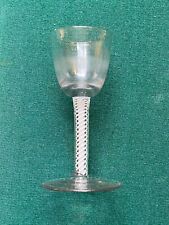 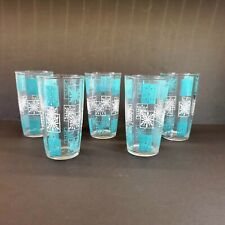