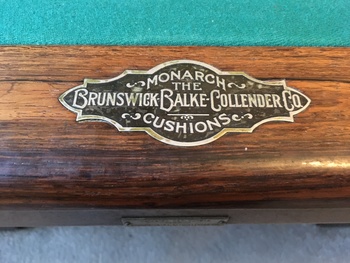 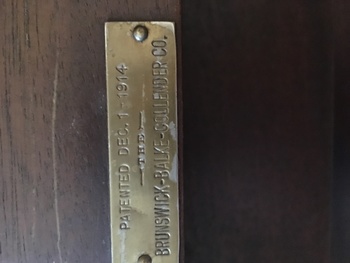 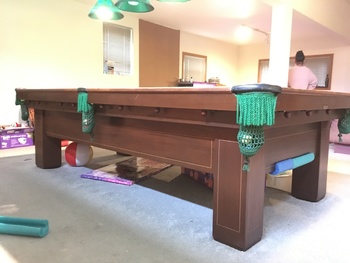 My favorite thing in the world!!! My 1918 Brunswick, Balke & Collander “The Madison” convertible carom/billiards table. My Dad purchased this table in 1968 at the age of 21, as a gift to himself for his success in his first year of business. Just a year out of high school, he opened an army surplus store in Carbondale Illinois, where he supplied the 25,000 students that resided there with the coolest selection of cheap, lightly used Levi Jeans, army jackets, leather jackets, marijuana paraphernalia and anything else those party animal college kids’ little hearts desired. “Sargent Pepper’s Rocky Mountain Surplus” was instantly popular from the moment he opened the doors. A place where bikers, hippies, squares and everything in between could find the latest fashion at a price that put a smile on even the burliest, most surly motorcycle enthusiast. Despite closing its doors less than five years later, following a terrible fire which forced its now burned down doors to never be opened again, people still tell me stories about how it was the coolest place in town and how “groovy of a cat” my dad was. Albeit hard for me to believe, I always enjoy listening to the different stories people choose to share with me. He passed away in December, and left this magnificent table to me, his loving Son. I’ve been playing all my life and have become quite a good player. I have him to thank for the years of hard work it took for me to break all the bad habits he taught me. My incredibly supportive wife made the decision for us to move to Southern Illinois, from Colorado to provide him the assistance he needed in his last 19 months of life, to be able to stay in his home that he built, which allowed him to retain the dignity he was so afraid he’d lose in a home. One of his few final wishes was that we keep the Pool table (if possible) and mid-century Redwood burl coffee table he was told he had to purchase, following instructions from a recent trip he took, despite having gone nowhere. I’m in the process of finding qualified movers to transport the table back to Colorado, where we’ll be in about 6 weeks. It’s costing me a small fortune, but it’s a small price to pay considering the lifetime of wonderful memories he worked so hard to provide for me. I’ll try to post some better pictures. Very neat table though. In the picture, you can see the hinges that run the length of the table, which allow you to quickly and effortlessly transform the table from billiards to carom, provided the extra rails for that. So I’m sending out into the universe my appreciation to my dad for this incredible gift, and wishing him luck in his continued journey into his next life. Godspeed, Pops.