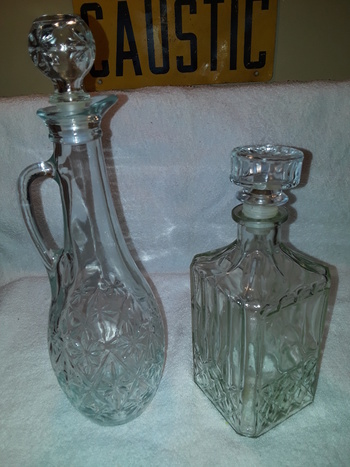 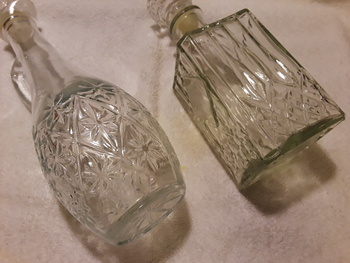 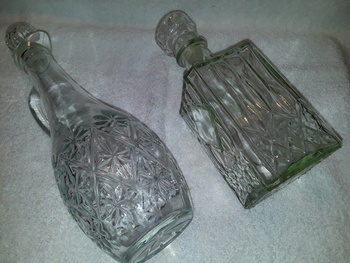 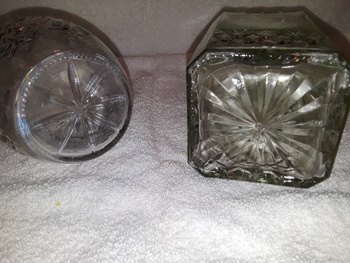 Or a (big) cruet and a liquor bottle, or whatever the heck they are/used to be. ;-) Last ones from the cleanout house pile here, now both looking *far* more pleasant than they did when recovered. ;-) ;-)

The tallest one is a little over 12"H with the stopper, about 4" at its fattest around. Pattern on the stopper matches the rest of it, a ribbed plastic bit on its stem to seal it to the bottle. No markings otherwise and nothing about the pattern strikes me as the slightest bit unusual -- that it has the handle nearly suggests to me it might have first simply been a 'fancy salad dressing bottle' from the grocery store...?

The shorter one reminds me greatly (but doesn't match) a 'set' of 3 I picked up a few yrs ago, at least in its general size and shape. [roughly 9" tall, 3-1/2" square] A little unlike those it features a square 'blank panel' on one side and a diamond 'blank panel' on its other, which could have once held paper labels. Also unlike my others, this one has a plastic bit to hold its stopper on. There are no 'government warnings/quantity designations' of any kind on it, simply the number "2" in the center of its bottom. The lack of those assorted 'other' things is about the only aspect that makes me think that it *isn't* just a fancy liquor bottle now missing its original labels.

Kinda seems to me that somebody suggested my other squarish ones might have been meant for 'limousine duty' or somesuch (an idea which seemed novel at the time...I'm not one accustomed to travel via that method of transport...?) and I suppose that might 'splain the lack of the legaleze too...?? No doubt regardless they're both just basically nondescript chunks of sparkly glass...but did I mention they were **free**?? ;-) :-) :-) <lol> 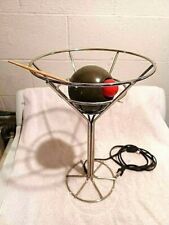 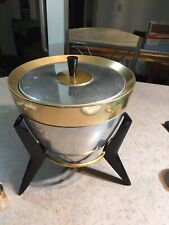 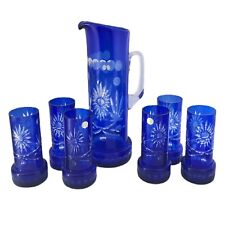