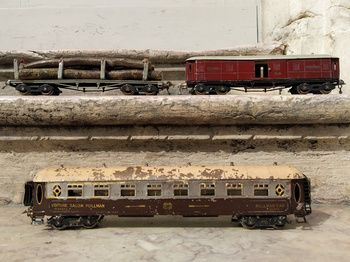 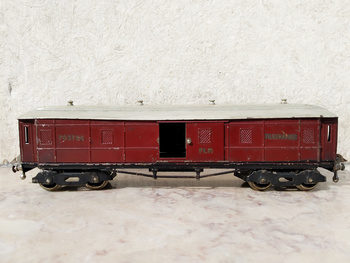 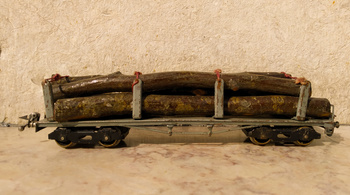 This are my only Louis Roussy wagons, unfortunatelly i dont own any locomotive, all his pieces are amazing, for sure the most detailed and ingenious toy train manufacturer from France, all LR items are rare.

...It is beleived that Louis Roussy founded LR sometime between 1926 and 1928.
There is very little information available regarding the creation of the company. 'LR' are the initials of Louis Roussy, and also of the 'O' gauge trains he named 'Le Rapide'. In the 1930's a factory at 61 rue Corvisart in Paris, France passed into the hands of industrialist Louis Roussy. With his partner René Trubert, this inventor designed lead soldiers, small cars and the miniature electric and clockwork driven trains sold under the brand name Le Rapide or LR.
The company also marketed model planes and ships. A factory was built in Trappes, in Yvelines over a 2 year period between 1930-32.
But starting in 1934, it was the Corvisart street location that LR would use as its commercial address and business headquarters.
It was Louis Roussy's intention to produce quality toy trains for young customers by using carefully chosen materials,
such as thick sheet steel, wood, brass and later, cast aluminum. He studied and filed numerous patents for electric motor design,
gearing and coupling systems. The LR catalogs bore a variety of mechanical and electrical equipment.
The trains produced were beautiful and were considered more finely finished and more loyal to French prototype than those made by competitors Hornby or JEP. LR operated until 1956. The brand was sold in 1961 to JEP. Louis Roussy was a Swiss citizen born into a large family of industrialists who owned, among other firms, the famous brands Nestlé, Peter, Cailler and Kohler.
A 1934 advertisement for Jouets Le Rapide LR promoted "the fastest train in the world of toys" (le train marchant le plus vite dans le monde des jouets). These were electric trains equipped to operate on 20 volt current.
LR trains were not scaled to the 1/43.5 'O' gauge standard. They were closer to a scale of 1:60.
Although they operated on 'O' gauge track, these trains were smaller in size and with less mass were capable of exhibiting higher speeds without derailment. Hence their name: Le Rapide. The same 1934 ad LR Le Rapide 'O' gauge Automotrice (Auto Rail Car) Circa 1957 offered 60 model wagons priced from 10 to 50 francs.

Louis Roussy and his French business partner, former architect René Trubert, were awarded a number of patents for toy and train inventions. The first one was French patent FR 640 515 (A), applied for February 16, 1927 and issued April 2, 1928.
This was for a coupling device which results from the juxtaposition on the same piece of a hook with notch
and a LR Le Rapide 'O' gauge Pre-World War II Clockwork Streamliner setlock in conditions that ensure locking by simple approximation and separation by finger pressure.
The lock consisted of an axis riveted to a small rectangular stirrup. In another example,
the lock consisted of an axis formed of a wire suitably curved in the form of a stirrup terminated by a small hanging ball.
The coupling was facilitated by lifting the axis of the lock utilizing the hanging part (a stirrup equipped with a ball or not) so as to remove the axis of the notch of the hook. This patent describes and introduces the first coupling mechanism mounted on LR vehicles between 1927 and 1933, with its two variants depending on the presence or absence of the small hanging ball.
The second patent was French patent FR 691 386 (A), applied for February 13, 1930 and issued July 8, 1930.
This invention consisted of a device for raising the spring of the drive mechanism of a toy (for example that of a locomotive mechanical toy) without touching it by turning its mechanism in the opposite direction to that of its normal operation.