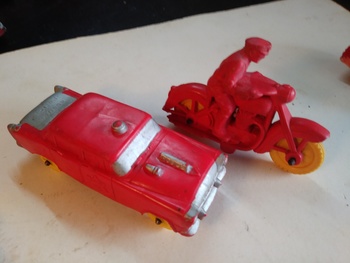 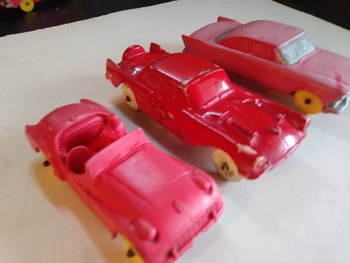 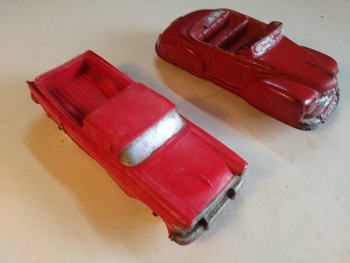 Picked up a lot of vehicles in a group deal. I don't usually collect these specifically but I love old toys in general and I thought it was a great deal I couldn't pass up. I figured I would break it down into groups to post.
This is the "rubber" group of mainly Auburn vehicles.
1st pic: Motorcycle and Police car.
2nd pic: Bug Eyed Sprite(?), not sure if it's based on a actual car, but the giant air horns on the hood would be a great selling point and a '57-'58 Imperial(?)
3rd pic: '57-'58 Ranchero(?) and a hard rubber car, possibly made by Sun Rubber, I have a similar car made by them.
I am in no way positively sure about what cars these are based on. They're somewhat fanciful and maybe just loosely based on a actual vehicle. This is just my interpretation and I would welcome and appreciate your take on what they might be.
I'll have to sort the others into some kind of group.
Thanks,
Bill