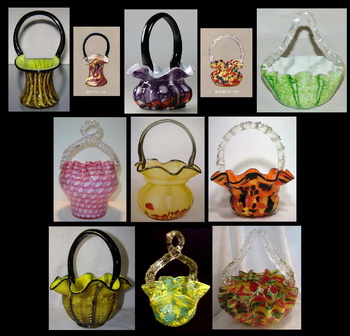 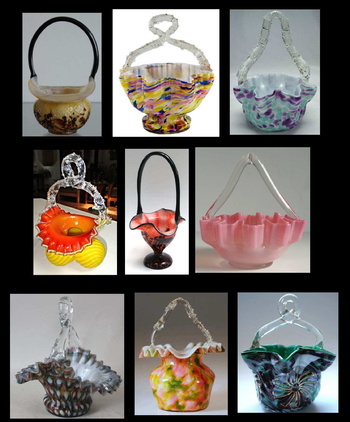 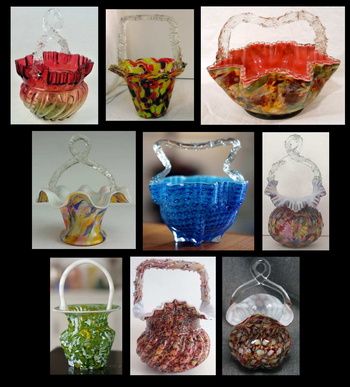 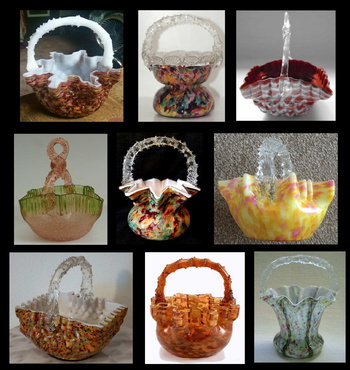 There has been a recent rash of 3 Welz baskets being declared to be Kralik in this forum.

Truthordare has posted 3 baskets by Welz, with a declaration that they are Kralik and no amount of evidence is going to negate that. She is convinced they are Kralik. As proof, in her most recent post, she now declares that it is Kralik because she owns other red Kralik production….. This proves her statement (somehow) that not all red is Welz….. a statement I would add, that not one soul in this forum has ever said….. But her Encyclopedic memory (LOL) could not be mistaken….. The same as it falsely "remembers" that I stated Welz closed in 1932..... A claim I never made at any point in time.... anywhere..... and how do I know I never did?? Because NO ONE KNOWS THE ACTUAL YEAR the production house actually closed. If I did know it, I would certainly state it publicly without denying that I did..... WOW!!!

This post will just be primarily pictures. These images represent 36 different baskets that I have determined to be Welz shapes. These are not by any stretch, all of their basket shapes, but they are examples of ones I feel confident are their production. I have likely just as many more that have not been confirmed to my satisfaction, and also some I have confirmed which I have not included here. Many of these baskets have been identified as Welz in several different recognizable Welz decors. Some have been identified in as many as 30 different decors by Welz. None of these forms have been found in decors which are solidly linked to Kralik..... although the claim that Kralik made more glass seems to mean that Welz could not have made them all.... Not sure how that works though.....

There are 36 different (I think) shapes shown here. I tried to keep variations of a single form out of the mix of shapes I am showing…. Variations are things such as a different handle on the same basket, or variations in rim crimps found being used on the same mold.

Image 3 bottom right basket shown in this forum as a Kralik basket by Truthordare is Welz not Kralik.

Image 4 top right basket shape is shown in this forum in 2 different decors by Truthordare, and declared to be Kralik. This basket is actually by Welz, and no amount of rubbish claims or chest pounding will alter that reality…. The funny thing about facts is that they are facts.... regardless of how many times people try to claim they are not....

Questions and observations welcomed…. Yes.... Even Truthordare can ask without being deleted…. I wouldn’t have it any other way….. ROTFLMFAO.