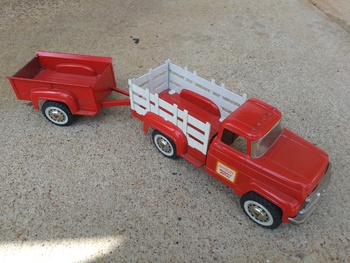 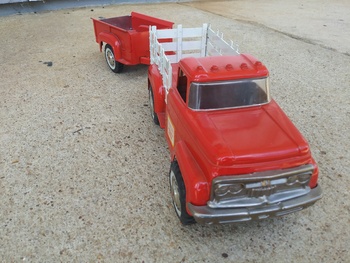 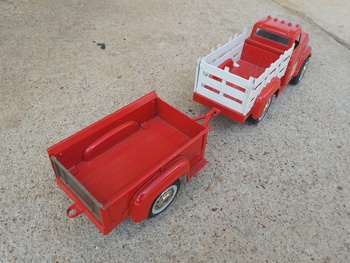 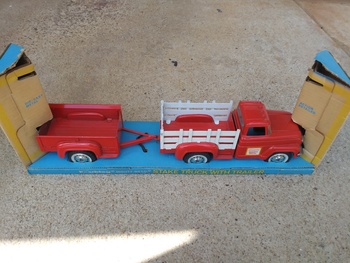 Submitted for your approval a Hubley Mighty Metal Stake Truck and Trailer #1860, 1969(on box). You can tell this is a Gabriel era Hubley because of the date 1969(Gabriel acquired Hubley in '66) and because it has a square "Hubley Mighty Metal" sticker(Hubley pre-Gabriel had green oval stickers). It was catalogued first by Hubley '63-'65 as #927 without specified colors(I've seen several different ones). Gabriel/Hubley offered it from '66 into the '70s. I'm not sure if they made it up to when Gabriel sold out to Ertl around 1980. I have a 1971 catalog repro that shows it being offered in red and green.
This Mighty Metal cab and chassis was used for several different trucks such as a wrecker and dump truck. These were a lot bigger scale than the pre '63 Hubley offerings, truck and trailer are about 21". It looks like Hubley was trying to compete with the larger Tonka's. Structo's, etc. It still wasn't as big as the larger Tonka's. It didn't matter, Hubley had been making mistakes, over diversifying, and not keeping up with the changing toy market. Diecasts were now the smaller Matchboxes, Corgi's, Dinky's, etc. Hubley actually made some nice accurate small scale vehicles in '59 assembled or in kit form(rare). They dropped it a year later due to lack of sales. If they had continued making them to when the small scale diecast rage peaked in the '60s, who knows, they might have been a contender.