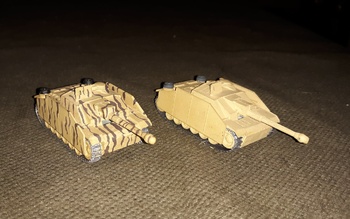 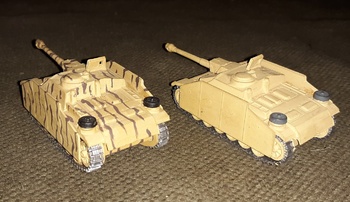 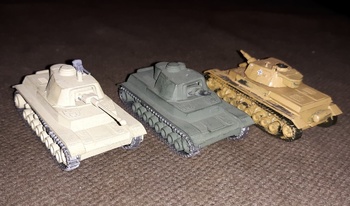 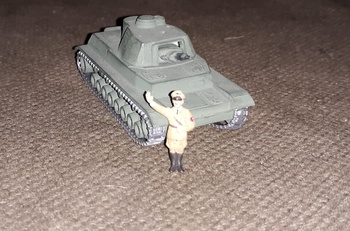 German armored vehicles this time. The Stug and P IV. These are 1/87 scale perfect for your HO train layout. Just a minute whilst I look up their full names.
The Stug aka Sturmgeschütz III was Panzer III with superstructure with a large 75mm gun instead of a rotating turret. It was the most common of all WWII German fully tracked armored vehicles. I painted these long ago when I was young and couldn't paint as well. The fixed gun with more armor seems like a good idea as long as the gun is pointed the right direction but in reality it is a 360 degree battlefield. The road wheels should not have been painted black.
The Panzer IV aka Panzerkampfwagen IV was the second most produced German fully tracked armored vehicle of WWII. Here are two versions. One has the long 75mm same as the Stug and the other the short 75. At the beginning of WWII the tank guns were much smaller then those that followed 2 years later. The short 75mm was for blowing stuff up and was not an anti-tank gun.
Last is the infamous Hitler. This came with a set of WWII leaders made by Roco Mini-Tanks. As we delve deeper into the Mini-tanks there are some much more complex and detailed as they have improved their models over time,