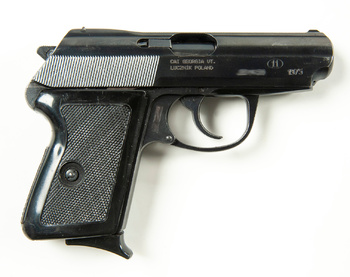 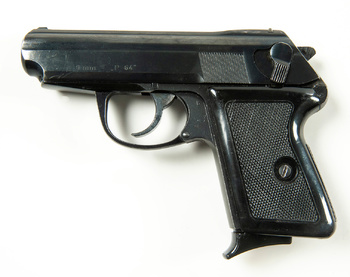 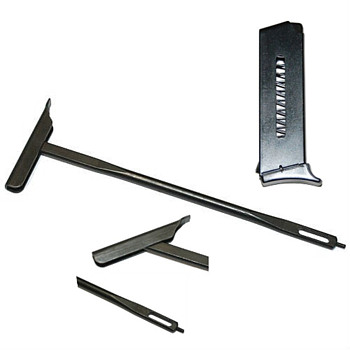 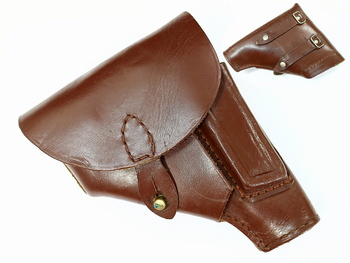 The P-64 is a Polish semi-automatic service pistol which fires the 9×18mm Makarov cartridge. The pistol was designed and developed in the late 1950s at the Institute for Artillery Research (Polish: Zak?ad Broni Strzeleckiej Centralnego Badawczego Poligonu Artyleryjskiego, later the Military Institute of Armament Technology, Polish: Wojskowy Instytut Techniczny Uzbrojenia w Zielonce—WITU). The design team consisted of W. Czepukajtis, R. Zimny, H. Adamczyk, M. Adamczyk, S. Kaczmarski and J. Pyzel. The P-64 is also known as the CZAK which is an acronym of the designers' last names except for J. Pyzel, who joined the team after the name had been established.

The P-64 is a double-action blowback-operated pistol with a spring extractor mounted in the slide. The rotating slide catch, in the pistol's frame, contains a protrusion which acts as an empty case ejector. The pistol's trigger mechanism includes a disconnector which prevents automatic fire. It has a double-action trigger which allows the pistol to be both cocked and fired with one pull of the trigger. It has an exposed hammer, rounded or pointed, depending when the pistol was manufactured. The slide has a loaded chamber indicator above the hammer which, both visually and by feel, indicates the presence of a round in the chamber. A manual safety lever that prevents the weapon from being accidentally discharged when the hammer is either cocked or released. This allows a round to be chambered with the safety engaged or disengaged. In the "safe" position, the firing pin is locked and the trigger bar is disconnected from the hammer notch. If the hammer is cocked and the safety is engaged, the safety will release the hammer. In 1973 the trigger mechanism was modified and the hammer was changed to a triangular shape, designed for easier cocking with the thumb.

The P-64 is fed from a 6-round single-stack box magazine. After the last round has been fired, the magazine follower lifts the slide catch, which locks the slide open. The slide can then be released by withdrawing the magazine a short distance and pulling the slide back. The pistol has a fixed front sight, and a dovetailed rear sight with a square notch. The sights are calibrated for firing at 50 m. The all-steel P-64 is manufactured mainly by machine cutting. It is issued with a spare magazine, a leather holster, and a cleaning kit.

Though fairly heavy due to its all steel construction, the recoil is sharp due to its blow back design and small size. This pistol has been a popular concealed carry choice since it was first imported into the U.S. It is a bit heavy for use as a pocket pistol. A common modification is to add custom grips to moderate the felt recoil. It is a handy little pistol if you have small to medium sized hands. The protrusion on the magazine acts as a rest for your little finger if your hands are not too large. Folks with large hands sometimes experience "slide bite" on the web of their hand during firing.

The P-64 was replaced as the service pistol of the Polish military and police in 1983 by the P-83, in the same caliber, but the P-64 continued in use for several years and is still in use to a limited extent. The manufacturing and finishing process made the P-64 too expensive to produce. It is very finely made and finished pistol.