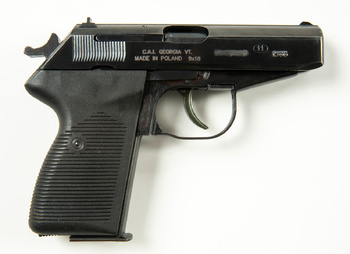 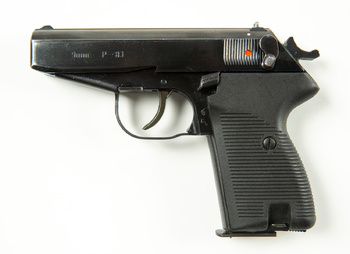 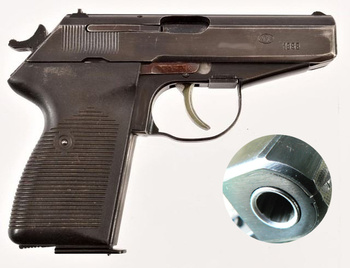 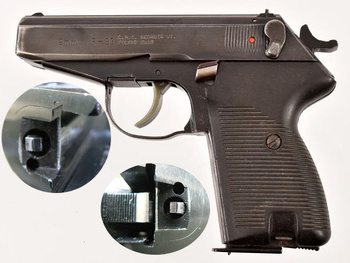 The P-83 Wanad is a single and double action Polish semi-automatic pistol, chambered for the 9×18mm Makarov cartridge. It was designed by Ryszard Che?micki and Marian Gryszkiewicz of the state research institute O?rodek Badawczo-Rozwojowy in Radom. The P-83 replaced the P-64 as the service pistol of the Polish Army and police forces. The P-83 is still in limited use by both but has been replaced to a large extent by more modern pistols chambered in 9 mm Luger.

This pistol is 6.5" long x 4.9" high x 1.2" wide and weighs 26 ounces. The P-83 is a double-action/single-action straight-blowback operated pistol with a single stack 8-round box magazine. It is primarily constructed of sheet metal stampings which have been blued.

The P-83 has an external case extractor on the slide which doubles as a loaded chamber indicator that both visually and by feel indicates that a round is chambered. There is a manual safety lever on the left side of the slide, upward position being "Safe" and lower position being "Fire". A red dot on the slide is hidden by the safety lever when in "Safe" mode. The "Safe" position decocks the hammer so that the trigger remains in the single-action position, and drops the firing pin down to a position where the hammer face is milled to prevent contact with the pin. The firing pin is designed to prevent forward movement when the safety is engaged. The P-83 also has a hammer block safety.

The P-83 was designed and adopted because of the very expensive milling and finishing processes needed to produce the P-64. The P-83 is remarkable and ahead of its time as it is made almost entirely from stamped metal parts, even the slide. There are very few milled parts in this pistol and it was much cheaper to produce. That being said, very advanced manufacturing techniques were needed to produce a pistol made almost entirely by using the stamping process. A very fine article in the blog below goes into extensive detail about the process used to produce this pistol.

More information about the P-83: