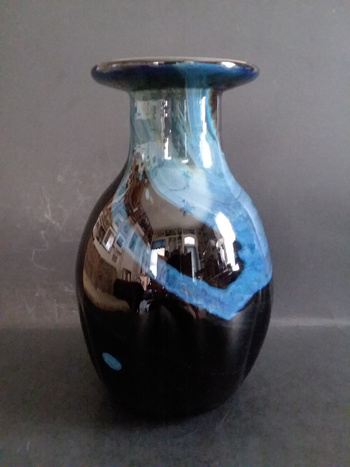 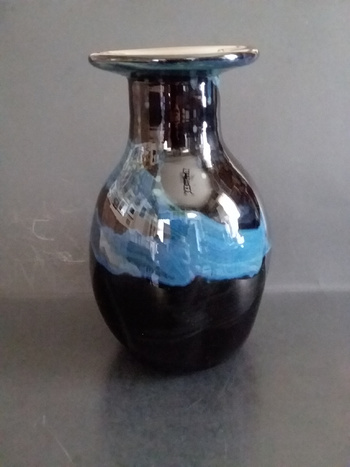 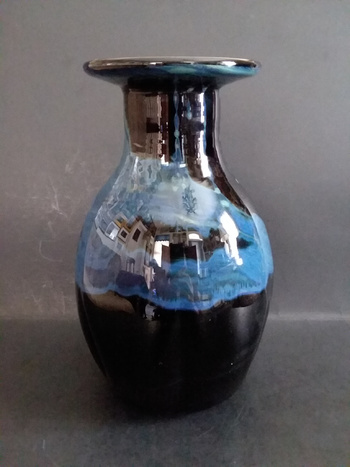 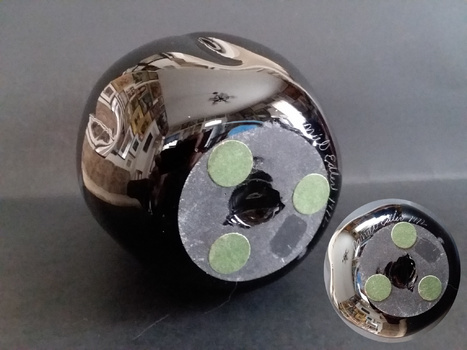 Daniel Edler is an Illinois studio glass artist and falls into the first wave of American studio glass artists. Edler became interested in art glass in the mid 1960s and attended a glass workshop given by American studio art glass pioneer Harvey Littleton in 1964. He earned a BA in Architecture in 1962 and MFAs in Visual Art & Pottery and Sculpture in 1965. His early interest was in architecture and pottery and he taught pottery making at a progressive school. He earned national recognition and awards for his pottery work. He started to seriously work as a glass artist about 1968 after taking his students to an art glass studio to introduce them to glass art and to learn how to set up a glass blowing studio at his school, Scattergood in West Branch, Iowa. He was one of the founders of the Glass Art Society in 1971 and is a charter member. He was invited to be a guest artist at Stuart and Sons Crystal in Stourbridge, England in 1971 and afterward was a guest artist at several well known glass working schools and companies in Europe. He returned to the U.S. in 1972 and received a grant from the National Endowment of the Arts to work as a resident glassblower for the state of West Virginia. At that time, West Virginia was still the location of numerous well known American glass houses. He was employed by the Fenton Art Glass Company in 1973 to develop a contemporary art glass line. He decided to open his own studio in 1974.

I was able to contact Daniel Edler and sent him images of this vase. He told me that this vase was made with scrap plate glass he got from Pittsburg Plate Glass (PPG). This was the second type of glass that he used. The first source of glass he used was clear glass marbles from Corning Glass of Toledo, which Corning melted and put through a blower to make fiberglass. That was the same glass Harvey Littleton was using at that time. Daniel added cobalt and nickel to the PPG glass to make black glass and nitrate to make the other colors on the vase. He was surprised to see such an early piece of work by him "in the wild". He has a couple of pieces made with this black glass in his collection. My vase predates his system of putting inventory numbers on his work which he started in 1974.

This is the earliest dated piece of Edler's work that I have seen, so I threw my April budget out the window to buy it. Edler is well known and collected in Illinois and nationally. He is about 80 years old, now, and transitioned from art glass to painting some years ago and is now, as far as I can tell, retired or semi-retired. I have been looking for an Edler piece for my collection, and while this is more subdued than his later work, it was created during a very interesting period of his career. His later glass all fell into nine creative periods that he named and indicated along with his signature and the date on each piece, so again, this example is unusual as it just has his name and year it was made. His glass is also interesting because he worked alone, without assistance.

There is an excellent article about Elder here:
https://issuu.com/journalstandard/docs/trail_fall2012/37

This article is dated as Edler was born in 1940 according to various personal information sites. It is also a bit of a sales pitch as this site apparently offered his work for sale at some point:

".......Daniel Edler, now in his 60’s, is one of these people. When offered an engineering scholarship to the University of Illinois he decided instead to attend the University of Northern Iowa, where he devoted his studies to the arts. He later developed an interest in architectural history which introduced pottery into his life. He began teaching a small pottery class. He was still so intrigued with the art of glass making, that in 1968; he took his pottery students on a trip to a glassblowing studio in Rochester, MN. On his return he set up a studio where he could teach glassblowing as a course on campus.

In a few short years he had developed his skill so well that in 1971 he left teaching and began traveling worldwide as an apprentice in several companies. During this time he was asked by the State of West Virginia to become their resident glassblower. In 1973, he was employed by Fenton Art Glass Company to develop a contemporary glass product line. He soon decided to venture out on his own. He searched out the most central area of the U.S. that had an abundance of natural gas to run his furnaces. He ended up in Cedarville, IL and became a one man business, doing all his glass items, running his business and traveling worldwide. He still manages all this today and raised three children with his wife Roberta.

He has always been one of the few recognized true glass artists of our time. His skill of glass blowing is admired and ranked among the most beautiful in our nation. People around the world revere his ability to produce unique and colorful pieces.

The reason for his uniqueness is not only are his pieces hand made but each color he uses is specially made at that time for the particular piece he is making. So no two pieces are alike. He envisions his piece, and then blends certain chemicals with the molten glass to create the specific colors he sees in his mind. His pieces range from table top collectibles to pieces that may be as tall as 14 ft. His background in architectural art has brought his creations to a new level in the past few years. He is always dreaming up new patterns, designs, and structures to create his new and exciting items.

His glass has been featured three times in the International Design Journal. His works are displayed everywhere from individual homes, to art galleries and museums around the world."