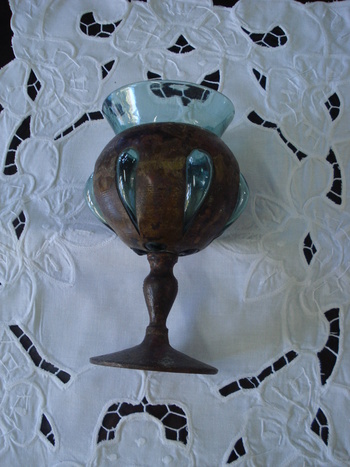 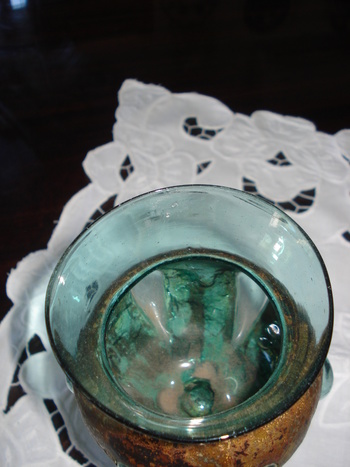 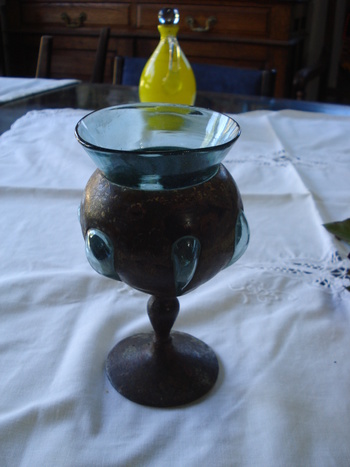 This goblet is only one. Also was bought to Fabiana Furman in her shop here in Córdoba. Just before the quarantine, was our last purchase. It is attributed to Odilón Ávalos Razo, manufactured in the 1950 in Tlaquepaque, Jalisco, Mexico. The metal part of the goblet is two pieced (screwed together) and the glass has the green bluish color of very old glass, the metal has also a patina to give an old look. https://arnoldauction.hibid.com/lot/70708-143246-79414/very-rare-mcm-azogue-encased-blown-glass-goblets/
Ávalos Razo was the son of Camilo (same last names), who owned a blown glass factory called "Carretones" in Mexico City, that produced bottles for tequila and other utilitarian glass pieces. Odilón (1881-1957) moved to Tlaquepaque, in the vicinity of Guadalajara and developed this very creative technique for "imprisoning" glass in a previously manufactured metal encasing, the pieces that came out of his workshop were mainly lampe shades, glasses and cups. The goblet is two pieced (screwed together).
A bit more of history from http://quinardfamilytrees.blogspot.com/2009/01/vidrio-soplado.html In 1834, the Quinard family, of French origin, became the only manufacturer that existed in Puebla, which gave the opportunity to teach the youth interested in this craft. It was at that time and place that the first Mexican glassmaker was born: Camilo Ávalos Razo is considered the pioneer of the art of glass blowing in Mexico. Don Camilo had three sons who inherited the trade. Odilon Ávalos skill was the oldest, and taught his brotheres Francisco and Camilo. They created the most important dynasty of glass artisans in the country and we owe to them the growth of glass blowing and the installation of other workshops in Puebla, Apizaco Texcoco, Toluca and Guadalajara.