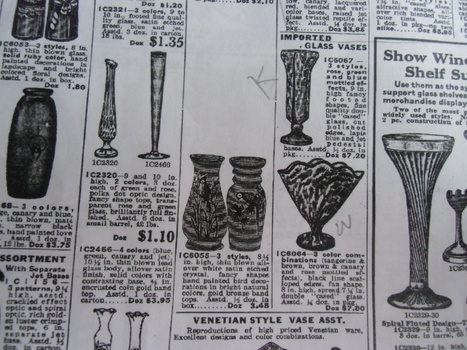 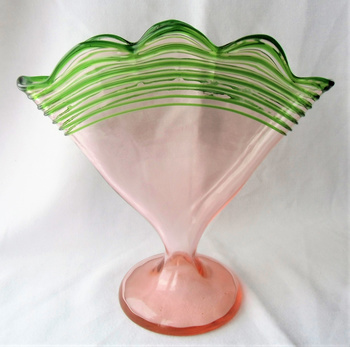 This little image from a Butler Brother ad page, titled VASES, and with segments titled Bohemian Imports, and others not titled at all, can be tricky. Tom Felt who has many functions at the West Virginia Museum of American Glass, put together a Monograph with all the ads he could find from BB, and made a booklet out of it in 2012.

You will notice that in my cropped image you see both apparently, the vases on the left are by Tiffin, but looked so much like some Czech glass bud vases, my presumption was they were also Czech.

A CW member found that they are not, in fact if I had read the whole description with the colors and satin finish, none of my Czech glass bud vases in this shape have a satin finish, then I would have realised they were not produced probably in Czechoslovakia.

The irony is I like Tiffin glass, their pieces are pressed glass, and they use a small satin color palette, where black is the most often found, they have an emerald green line, and a few rare multi color pieces, such as these vases. with a pale blue satin body and yellow pedestal foot rest.

The other conundrum is pieces that are shown together in the same section, are often believed to be by the same maker. On the right you see a Kralik vase, that was quite popular and under it a scalloped fan vase also quite popular, does this mean this particular fan found in a dark blue and yellow spatter is Kralik? Or it does not mean that, only that both were imported goods.

Due to the large quantity of decors in this scalloped fan vase series, which do not all have the same proportions, indicating different molds, why would it not be possible that some were produced by Kralik?

This is part of the beliefs I have about interwar Czech glass, including the series of translucent glass pieces with various colors of glass applications.

A post meant to consider various outcomes, when you study this complicated category. Images are my vases, I will ad a few post for more examples of the Tiffin slender pressed glass bud vase, and the variety and number of the scalloped fan vases documented here on CW.

The methodology of attributing Welz glass, according to what I have seen, read, and experience in the last 6 years.
The blue and yellow spatter decor, is another decor that was first attributed with great fanfare to WELZ, because the tiny fan vase image of a catalog document had it illustrated in the same colors.

Welzebub keeps forgetting that I was here then, the historical moment of finding a few glass pieces, and immediatly concluding that they were Welz products, nothing said they were, the documents were blank apart from the colored drawings, these could have been modified... who knows, there were no witnesses to any of this tale except welzebub himself.

The next tool of major importance was the labels, which were shown on the German lexicon, under Franz Welz, as proprietor of the glass they were put on, or as another role? Eventually only the labels with the initials FWK were viewed as proprietary for the glass piece involved, and that added another group of glass shapes and glass decors.

The next tool was the Welz content in both books of 1995, under Welz as producer, the Passau Museum and the Novy Bor Museum, most of these pieces were pre WWI, and the two groups of Welz glass were totally different, which is a little strange.

The tool that is still being used today is the Butler Brothers monogram put together under the insistence of welzebub, and since 2012, he has made many efforts to add more decors and shapes, by approaching BB assortments on offer, as representing WELZ 100%.

If you add all these pieces together as a base, and find more shapes and more decors with them, its not surprising that after all these years, you can only question a few of the attributions, because the rest are bolstered with multiple connections in shapes and decors.

This post is not very old, but it is a BB assortment that is claimed to be all WELZ, when a closer scrutiny shows some discrepancies. Especially the large bowls, that have Ruckl and Kralik as potential producer IMO.

The multicolor spatter pieces compared to each other do not match in color, the dark one is blue on one glass piece example., and magenta on the other. A square peg in a round hole cliche seems to apply here. I could write a book about all that has happened, been said, been denied, and been invented.

By destroying my credibility, and increasing his Welzebub thinks he is winning over new members, and solidifying the effect on the older ones. I feel sorry for all of you. Believe me, 'most' collectors of importance and intelligence would not stoop to his level of B.S.