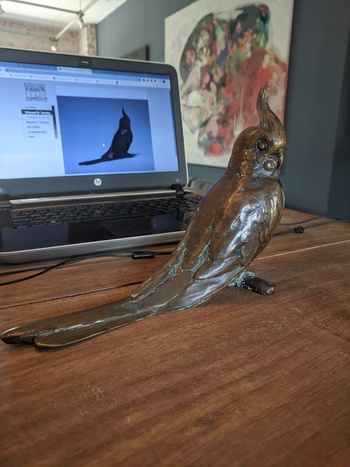 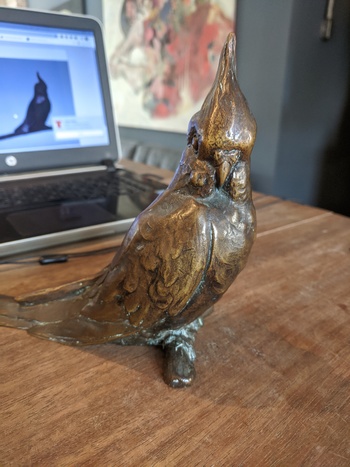 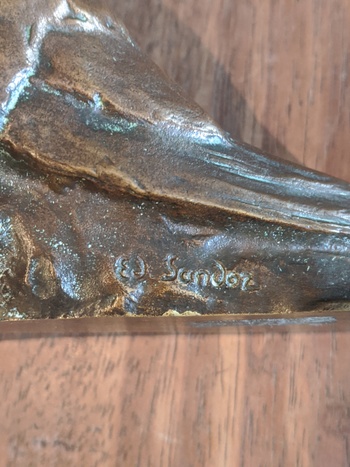 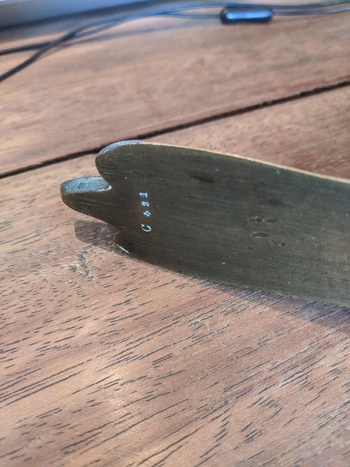 Found this jewel at a garage sale. It is a 1922 bronze by Edouard Marcel Sandoz depicting a "parakeet (a cockatiel, maybe?) on a branch, with raised crest". The piece is signed "Ed. Sandoz" and marked in the bottom by the Contenot foundry.

It is listed in the Edouard and Maurice Sandoz Foundation catalog (FEMS-S1105) and in the sculptors' catalogue raisoneé (OIS14-1922-2). It measures 16cm high by 23cm long.

"Born in Basle, educated in Switzerland, Edouard Marcel Sandoz worked mainly in Paris, where he settled in 1908. A sculptor of men and of animals, he expressed himself in bronze, in ceramic, and through the direct cutting of stone. A painter of flowers and of landscapes, he was also an unflagging producer of sketches and water-colours.

His motto: “In art, one has to love everything: nature, science, one's fellow man…”

His defining characteristics: intellectual curiosity and technical discipline. His freedom of expression was grounded in mastery of classical and traditional techniques, his knowledge of materials, the constant search for new tools, the opening up of new artistic territories, and the study and profound understanding of his subject-matter.

His very personal style, developed in the course of a long career, bears the imprint of the Art Nouveau period, in which he was a forceful presence.The predominance of animalism in his sculptural work incited him to found the French Society of Animalists in 1933.

His commitment to the service of his fellow artists led him to preside over the Baron Taylor Association for more than thirty years, to found the Charitable Society for Children of Artists, and to contribute to the creation of the Cité des Arts in Paris.

In recognition of his talents and achievements, France elected him a Member of the Academy of Fine Arts, and appointed him to the rank of Commander both of the Legion of Honour and of the Order of Arts and Letters."