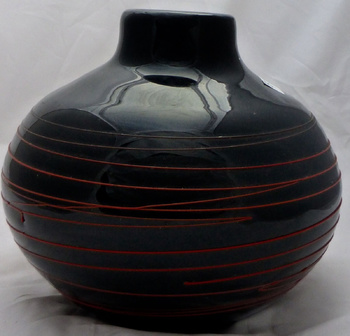 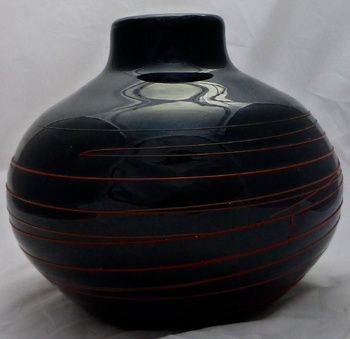 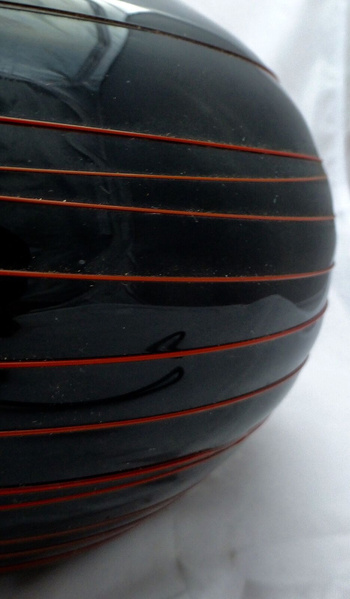 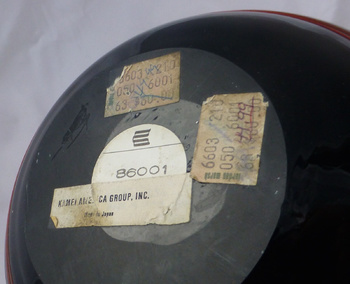 This vase is 7" in diameter and 6.5" high. It is quite light in weight, but I have not weighed it yet. It is quite dirty in the images shown, I hadn't cleaned it yet. Due to all of the very interesting labels on the bottom, I had to clean it with rubbing alcohol. Better (I hope) images coming. This vase was originally offered for $60 at Jordan Marsh, a high end department store, as shown by the two price tags. It was marked down twice, to $49.99 and $44.99. Still a chunk of change for the time. I have not yet identified which Japanese glass house made this vase.

The labels helped me to discover a great deal about the Kamei America Group, AKA Kamei Studios. I will be writing an in depth article about this for my Japanese art collection web site. Short story, Erich Suto, despite his Japanese sounding name, was born in New Jersey of Hungarian descent. In mid 1980s he incorporated and became CEO of two companies based in California, one of which was Kamei Studios. Apparently, he was importing art glass from Japan for sale at high end department stores. He, or a surrogate, often signed the glass with his name or with an acid etched copy of his signature. I have not been able to determine if Mr. Suto had any role in designing the glass but, since he lived in the U. S. of A., he obviously had no role in making the glass, which labels show was "Made in Japan". Labels for Kamei Studios/Kamei America Group use a black and white version of the Kamei Group Osaka label, but I do not know if the two companies were affiliated. The Kamei mark used by both companies does not seem to have been trademarked. I am still investigating this. Unfortunately, I have discovered that Mr. Suto is deceased.