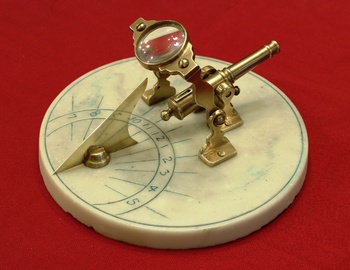 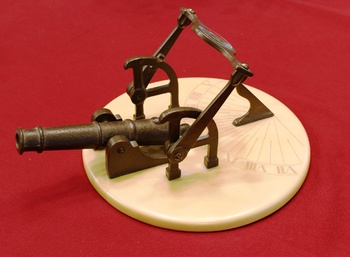 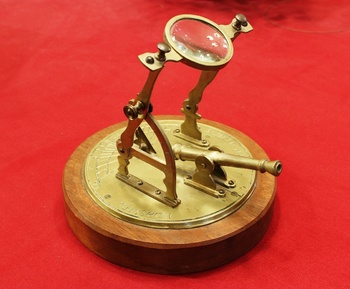 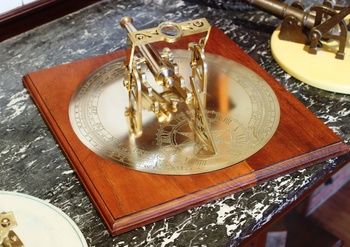 Not sure what category these fall under but since there's a cannon involved this seemed as good as any.

These are examples of what are commonly referred to as sundial cannons or sometimes called noonday guns. Originals date from the 17th and 18th centuries. They were sort of science-based toys custom made for nobility and the wealthy. The idea was to orient the sundial so it would tell the appropriate time. Then one would adjust the magnifying lens to focus the rays of the sun on the vent (touch hole) at precisely noon. Next, one would load the cannon with a blank charge plus add a little bit of powder exposed on top of the vent. Then at approximately 12 o'clock noon, the cannon would fire alerting anyone within earshot that it was high noon.

Since they were intended to be left outdoors in a garden or patio, they were generally made from materials that would hold up to the elements,i.e., brass cannons mounted on marble bases.

1st image. I built this one about 40 years ago from a kit that came from Dixie gun works in Union City, TN. It works just as it's supposed to.
2nd image. This was produced by a company called "Sundials" back in the 1970s and was meant to be a decorative piece. However, it is still functional.
3rd image. This one is a pure decorator piece. Whoever designed it had no idea how one of these would work and thus they angled the supports backward.
4th image. This beauty was manufactured by a company that sells yacht or marine cannons meant for signaling and to start sailboat races. The base is teak while the etched dial is marine bronze. I found it all corroded and dirty in junktique mall. With a little spit and polish, it came out looking like it was made of pure gold.