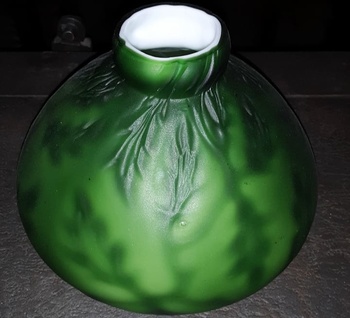 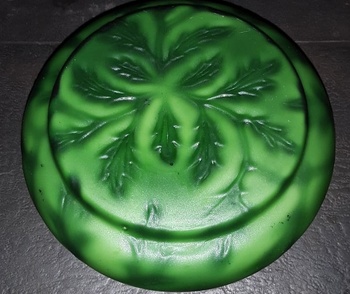 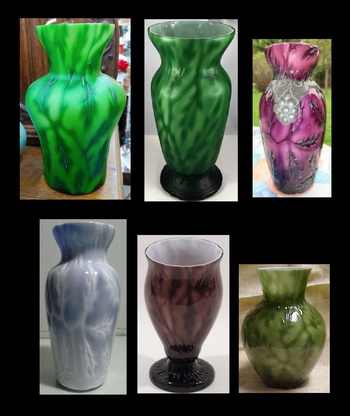 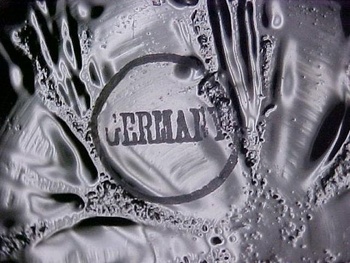 First of all, let me be clear. I do not really care who made this vase…. Whether it is European or American is of no real concern to me. What I do care about, and always have, is presenting information in public forums which is accurate and supportable. Information which will not pollute the knowledge of those who come here to read and learn. If you do not agree with my assessment of this production, feel free to voice that opinion, knowing that if you do I will challenge you to provide something (anything) to support differing claims.

I have a friend who owns this vase, and she was kind enough to let me use images of her example to post some actual facts about the glass and it’s origins.

She has owned this vase for quite a few years, and was informed that it was European production very early on. The region of origin has been determined, but the actual production house has never been identified. I only say this because there is an example of this vase posted in this forum under American Glass with the inference that it is production by the firm of Consolidated….. That is what the seller apparently said…… and we all know that sellers never say things that are not true. LOL

Upon seeing an example of this vase in the forum posted with inaccurate information, I asked a friend of mine who is a respected and recognized authority on the subject of Phoenix and Consolidated glass, and received the following reply:

“Craig, this vase is neither by Consolidated nor by Phoenix. Consolidated made no cased green glass in non-lighting form. They did make a huge amount of the cased dark green “banker” shades but that is it as far as I know.”

I was pretty sure of what his reply would be, but I always prefer to double check facts before stating them in a public forum where people try to learn… especially if the glass does not fall in one of my areas of specialty. This practice holds true for all of the categories of objects and art I collect. I for one, and I know many here agree with me, feel that posting false or misleading information, and leaving it intentionally to “prove some point”, is not only disrespectful to those trying to learn, but it also pollutes the knowledge base for those who do not know better. To me at least, there is no justifiable reason to do so….. but that’s just me, and I certainly can not speak for those that do it. Maybe there is some rational reason that just escapes me….

I am, and always have been of the opinion that “Facts are simply that, Facts”. It reminds me of a meme you see often.

“Just because you choose to not believe it, does not mean that science is wrong.”

So the vase in question is a vase that has been accepted for quite a while now, to be European production. It is seen in a variety of colors and shapes, none of which are even close to resembling the production of Consolidated Glass in America. I thought for a time that the production may be Czech, but after a time of looking at it, examples with a “Germany” provenance mark were seen occasionally.

The vase in image 1 measures approx. 5 inches tall and 8 inches wide at the widest portion of the lower body. It has a ground and polished upper rim with a chamfered outer edge. The surface of the vase is satin, but the décor is also seen in other colors, and also in a glossy casing.

Images 1 & 2 above are images of my friend’s vase.

Image 3 above are other examples of this type of production.

Image 4 above is an example of the acid stamp provenance mark found on some of this production.

Feel free to comment, whether you agree or disagree.