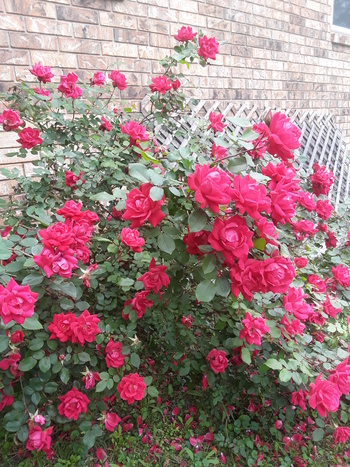 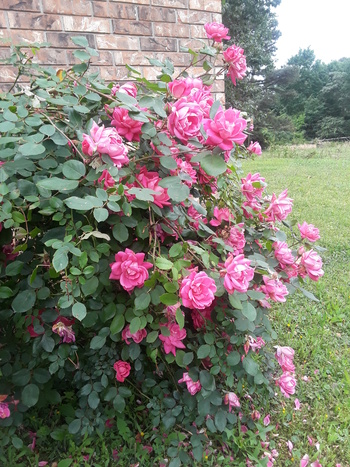 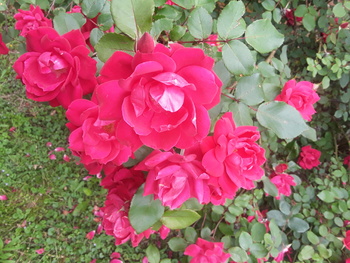 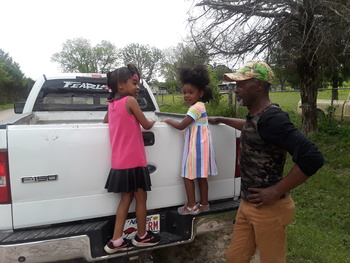 One bush generally red in color (pics 1 & 3) and another generally pink. (#2) Both slightly abused by a recent wind/rain event that happened worser there than here (there being roughly an hour NW, kinda in the middle of a whole buncha not anything much at all else but where people live anyway) these are both mostly "Mother Louise's" legacy even though the house itself in the background now belongs to her youngest daughter and her family. [which I still proudly can claim as one of three-ish 'adopted families' of my own at the moment, but all that gets really complicated really quickly and doesn't matter here anyway...]

4th pic is Michalea (LH) and Zendaya (center) playing together on the tailgate of somebody else's truck yesterday afternoon, being closely watched by their great-uncle Ty. I guess I myself can call them my own great-nieces too but the more funner part (which I didn't actually fully realize until yesterday when all these pics were taken) is that its already been slightly more than two years since both Ty and me spent the greater part of an evening otherwise in/abouts a local hospital room, the very same night when Zendaya actually entered Planet Earth to join all the rest of us. Michalea doesn't pre-date her by much more than another year or so, but I wasn't present there then, she's also from a different branch of the (that, my...once more ridiculously complicated) 'family tree'. :-)