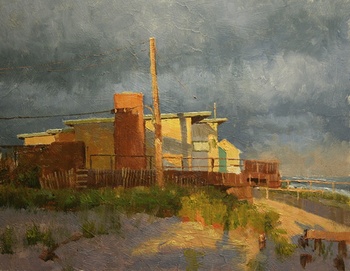 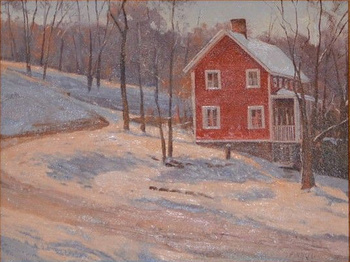 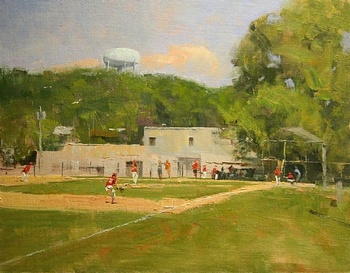 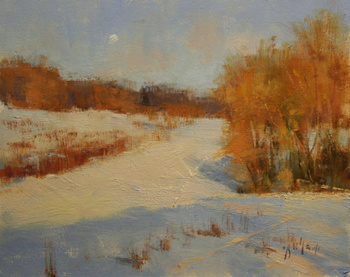 Here are some paintings by Paul Bachem, a plein air painter from New York. I have several more paintings by him in my collection. He studied with Harold R. Stevenson and Alma Gallanos Stevenson and had a 30 year career as an illustrator before retiring and focusing on plein air painting. His work is relatively inexpensive, if you want some original art by an accomplished artist. I paid for several of my paintings over a few months. Plein air painting is one of my favorite styles of painting. I am no longer collecting paintings, however, I will very rarely rescue something from a thrift shop to save it from an uncertain fate if it is not too large.

Paul has a web site: https://www.paulbachem.com/

"Light and Geometry", Paul Bachem, 11" x 14", oil on foam board. I immediately liked this painting and wanted it but had some life stuff going on so passed on it. A couple of years later, I found it was still on Paul's web site and bought it. I guess it is not to everyone's taste... I am a light and shadow freak, and blustery weather lover, though.

"Red House on a Hill", Paul Bachem, 11" x 14", oil on canvas board. I really liked this painting at the time it was painted, but cogitated a bit too long and someone else snapped it up. Sucker for winter scenes, I am. A few years later, I found it on the secondary market and was able to add it to my collection after all.

"Sunday Morning, Field 5", Paul Bachem, 11" x 14", oil on canvas. I spoiled this for someone else. While Paul was painting this one on location, a passerby stopped to chat with him and expressed interest in buying it as they had played on this field. Not long after I spotted it on Paul's web site and bought it. Paul thought I was the person who had expressed an interest in it. I didn't find that out until later. There will be an estate sale someday, so all hope is not lost..

"Moonrise", 8" x 10", oil on board, this was a sketch for a larger painting. No story with this one, except that I wish I had spotted the large version before it was sold.